Looking for a Hitman 3 Mendoza Silent Assassin, Suit Only walkthrough? Just like in previous Hitman games, one of the recurring Hitman 3 Challenges is to execute a mission flawlessly, without being spotted or causing any unnecessary collateral damage – while foregoing a disguise, instead wearing only Agent 47’s suit.

Hitman 3’s penultimate mission takes you to the picturesque vineyards of Mendoza, Argentina, and tasks you with taking out two targets – Don Yates and Vidal – in the midst of a barbeque. In order to fulfil the ‘Silent Assassin, Suit Only’ requirements, you’ll need to take care to remain undetected by the partygoers, employees, and guards, while also making sure to take out (but not kill) any potential witnesses and tuck them away somewhere nice and secluded.

Figuring out the route you’ll need to take in order to avoid running into any difficulties can take quite some time – but luckily for you, we’ve done all the hard work for you and are willing to share some expert tips. Here’s how to complete the Mendoza Silent Assassin, Suit Only challenge in Hitman 3.

Chat to Diana, grab your invitation, and run straight down the road to the party reception. Hand in the invitation and make your way over to the large room with all of the fermentation tanks in it. 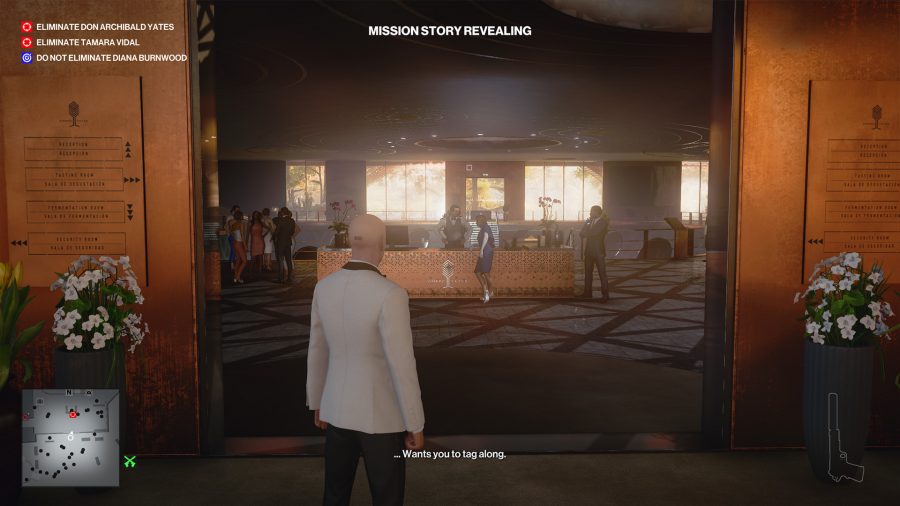 Head to the distant right-hand corner of the room and run straight past a barricade, down some stairs, and into the cinema. Be aware of the two workers on the right, and avoid them by going left and down the aisle towards the main stage.

There’s a propane flask you need to grab here. Pick it up and run straight back up to the fermentation tanks. Head outside and upstairs to the balcony overlooking the vineyard and wait for Vidal and Burnwood to arrive. 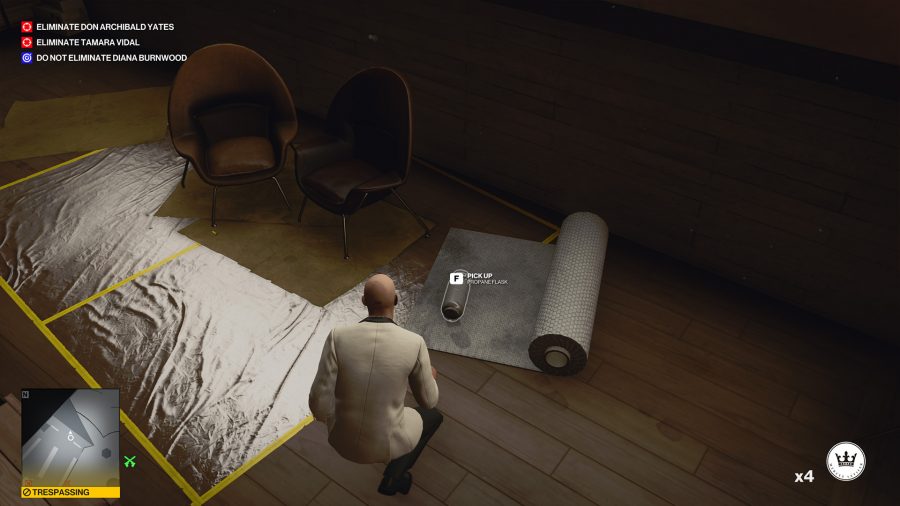 Go to where Vidal leans on the balcony and place the propane flask down as close as possible. Place is the key here, because if you throw it you’ll raise some alarms and the tank will start leaking, eventually leading to an explosion you can’t control. To place the flask use the CAPS key on your keyboard and move it around until the prompt appears. The closer to Vidal the better as you don’t want any collateral damage. 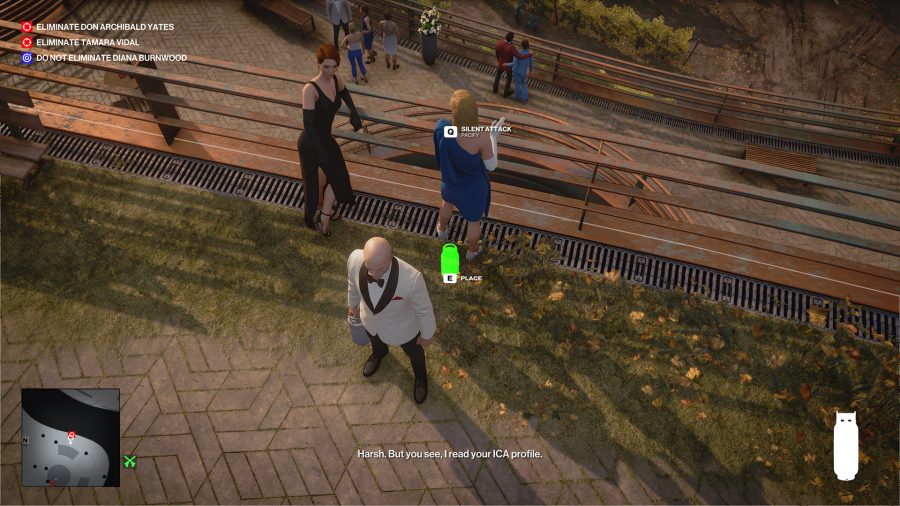 Turn around and look for a guard leaning against a flower bed. From the other side of the flowers, hop into the arrangement, stick to cover behind the guard and subdue – this drags him into the concealed location without anyone spotting. 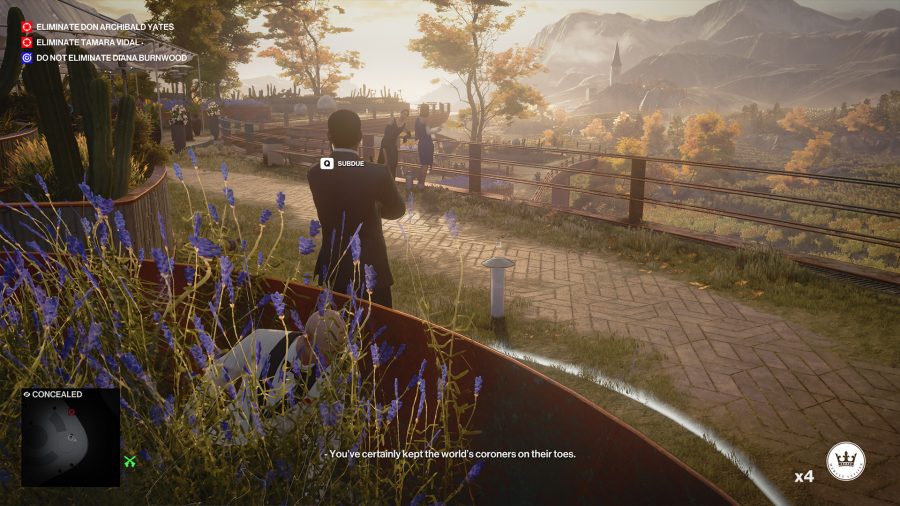 Now wait for the conversation to play out and when Diana is a good distance away you need to shoot the propane flask twice with a silenced pistol. The cue for this is just after vidal stubs her cigarette out. Incredibly, this counts as an accident kill and so is a legitimate way of completing a Silent Assassin run.

The best thing about Hitman is that *this* counts for a 'Silent Assassin' run. pic.twitter.com/gR62pRBYIw

Sneak out of the flower bed and head straight back into the main wine room. Take the stairs down to the floor of the area, avoiding the two chatty workers on the upper balcony. Just before you get to the bottom, vault over where the safety tape is to avoid detection.

Sneak left between the worker and the big grape pressing doohickey into the next room. Grab the fuse from the worker at the table on the left (he will barely notice you), then turn around and go over a tiny bridge. Take out the worker on the right and hide his body in the dumpster, then scale up to the next worker and knock him out – don’t move the body, it’ll be just fine up there. 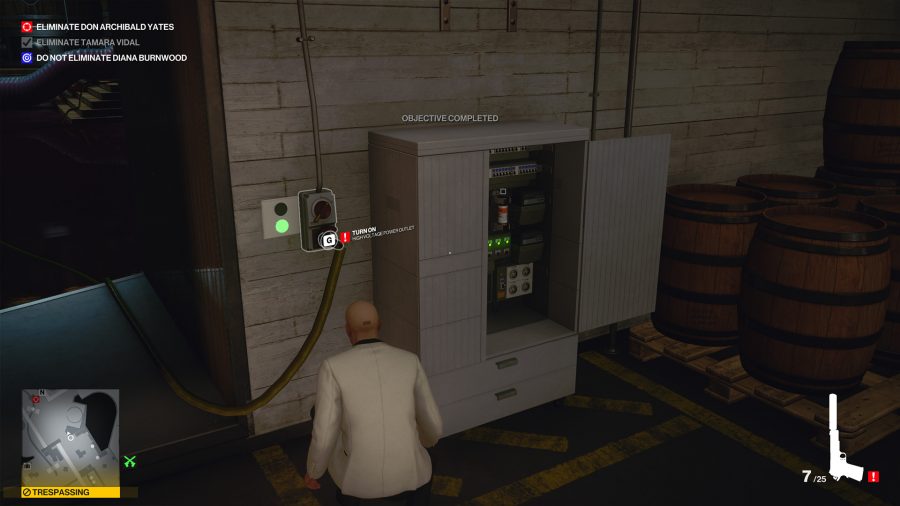 Now grab a wrench from the table where the first worker was and sneak through to the main room using the pipe for cover. Next sneak over to the wine barrels that are next to one of the workers on the main floor. Another worker will move back and forth on the left, when he starts heading away from you, toss a coin into the grape presser to distract the guard on the right. Use this window to go up to the main valve and tamper with it – the guards will almost spot you but you should be fine to quickly move in and out.

With that broken the main floor begins to flood with wine. Use this time to go and put the fuse in the fuse box between the entrance to the main floor and the worker you stole the fuse from. Also make sure to turn the power on – the switch is next to the fusebox. 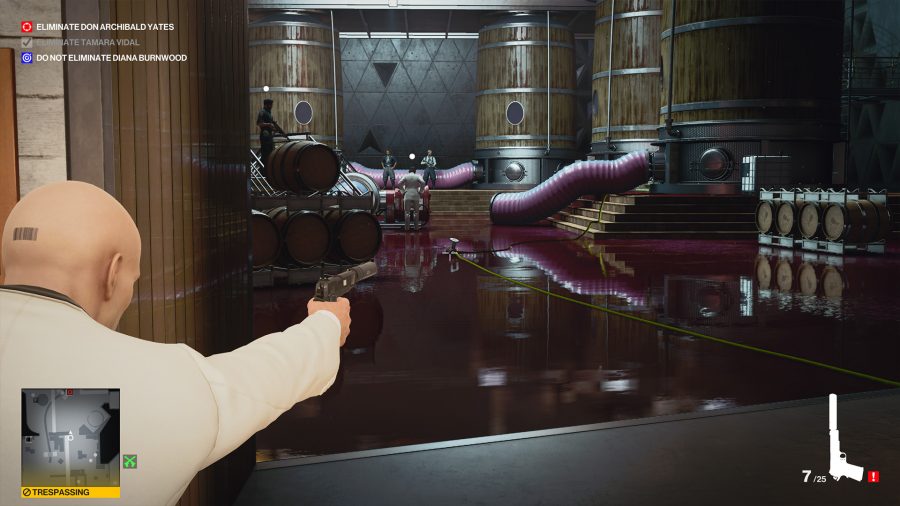 There will be a commotion and eventually Don Yates will show up and clear everyone from the room. One guy will head your way so duck out of the way for this and then take cover by the entrance again. When nobody is on the floor except Yates it’s time to shoot the main plug with your silenced pistol – this will be another accident kill.

Hidden assassin: Check out the best stealth games on PC

Now head back up and over the scaffolding where you knocked out the second worker and make your way over the crates and packing on the right side of the room. Some workers might start to spot you so just be quick and take temporary cover in the freezer on the right if you need to. Next, look up to the shelves and hack a vent. Hop through that. 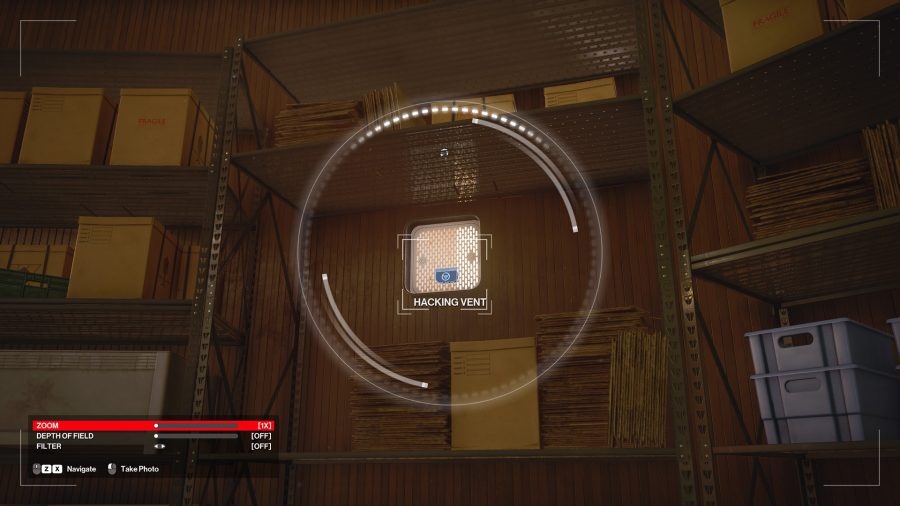 Now you just need to hop the fence, go to the stairs up the cliff, take out the guard with another coin toss, hide his body and gun, and then head to the final tango with Diana.