In the run up to the PCGamesN Awards on December 23rd – mark your diaries, people – we’ll be publishing daily staff picks of the finest games 2016 has had to offer. Today it’s Joel prattling on about purity and breathing room…

I was 14 when the first Hitman game came out. Accordingly, concepts such as patience,  planning and observation were rather subservient to things like excitement, action, and trying to download 30-second pornographic video clips on a 56k modem while my mother was out of the house.

It was for these reasons that I never ‘got’ Agent 47’s first outing – it just didn’t click for me. I had a gun, there was someone I was supposed to kill, and we all know that the shortest distance between two points is a straight line (please save your arguments about non-Euclidean geometry for the comments section). But the game just wouldn’t play ball. A bodyguard, locked door, or some other impassable obstacle would repeatedly block my progress. It was quite literally impossible, and as such I never made it beyond the first mission.

And so it was that mine and 47’s relationship laid dormant for over a decade. Barring a very brief flirtation with Blood Money, the next Hitman game I played was Absolution. And although I did complete that one, probably the less said about that the better.

Yet all this time I remained enamoured with what Hitman represented. A sandbox of creativity, in which you are given a basic objective, a variety of tools with which to complete it, and then the rest is up to you. I generally enjoy puzzle games, and that’s essentially what Hitman is – only it’s a puzzle game with the scale and scope of a triple-A adventure, and the puzzles are intricately designed dioramas of death, rather than something far more abstract or contrived, as the genre so often serves up.

The key to making Hitman realise its potential was to remove any adornments, to strip it back to its most basic elements, and to let what’s left breathe. Absolution suffered for a number of reasons, largely poor level design included, but for me the most chronic failing was the score system. Watching as your numerical grading decreases in front of your eyes is a complete creativity killer. If I’m supposed to be able to choose my own approach, then why is the game explicitly telling me that every approach except one in particular is objectively wrong?

The other shackle which held the series back at times was its attachment to story. A story which, frankly, not even the biggest Hitman obsessives really care about. In an era when triple-A games are expected to have RPG systems, dialogue trees and immersive narratives, here was a series that had the luxury of eschewing all such things. These are games about gameplay and nothing more, and that should be creatively liberating for those behind the scenes. 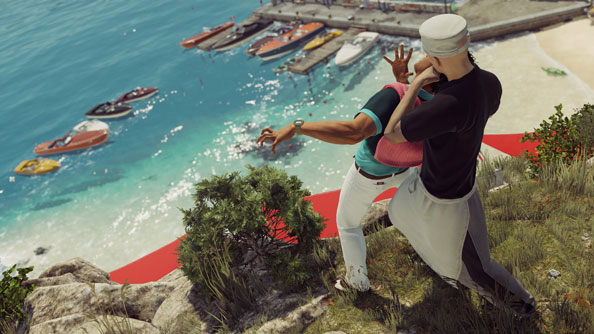 2016’s Hitman (if you make me try and style it HITMAN I will hire a bald man to garrotte you) recognised these things. Gone is the overt scoring system, gone are the extraneous objectives, and gone, by and large, is any real plot. (Yes, there is some loose connective tissue in the form of each episode’s ending cinematic, but it’s a token gesture at most, and every episode lives happily entirely in isolation.)

Instead we’ve been served up the perfect distillation of what Hitman has always been about at its core. This is partly a result of the onward march of technology – graphical improvements play a part, but more advanced (although still imperfect) AI has been even more important – and partly a result of clarity of thinking on the part of IO Interactive, for which they deserve immense credit.

Each location has been exactingly created, and once you are placed within them – crisp white shirt buttoned up, lockpick in hand – the game leaves, and trusts, you to get on with it. There are Opportunities to be explored should you so wish, but even this signposting can be turned off. And anyway, the most creative solutions to the problems facing you aren’t those teed up by the game itself. 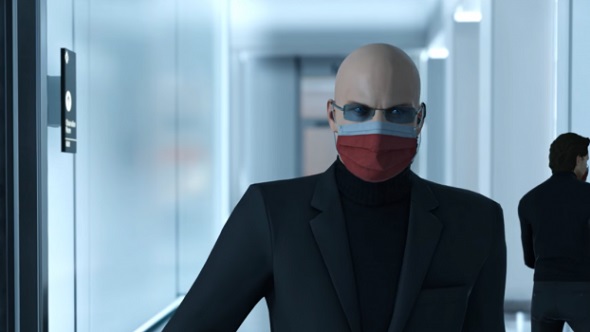 The final stroke of brilliance has been the episodic structure, so maligned and misunderstood when it was first announced. Much of the distrust is understandable, as this was a wild departure for the series and, undeniably, the messages about what people would receive, and how and when, were hugely muddled for far too long.

But how the gamble has paid off. Remember what I said about letting things breathe? That’s exactly what’s happened here. Because to properly appreciate Hitman’s true nature, even when things have been stripped back to exactly that, one needs to take the time to appreciate the intricacies and opportunities within what’s been provided. Although even more than that, one needs to be /allowed/ the time to do so.

Were Hitman to have released in a box with all six missions ready and waiting, it still would have been an excellent game. But there’s no way that players would have given, say, Sapienza the time and attention it deserved when Marrakech was just a button-click away. By serving up each location and each hit one-by-one, IO enabled us to fully imbibe and enjoy what we’d been given.

As such, Hitman isn’t just one of the year’s best games, it’s also one of its boldest.