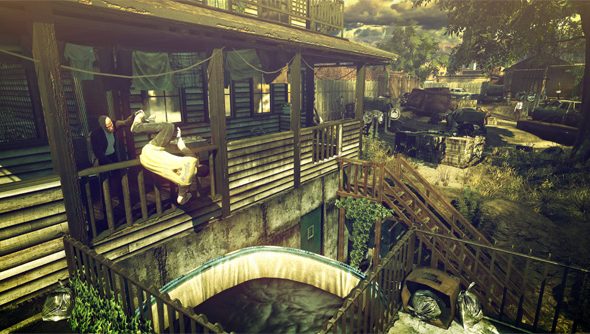 Today at GamesCom, Io revealed what they described as “the final piece of the puzzle” for Hitman players – a new mode titled ‘Contracts’ that allows players to pick and choose assassination targets from within all the levels in the game, and challenge friends and other players to complete the kill according to the challenger’s terms.

In the demo of Contracts mode we saw, Io developers challenged each other to take out two targets in the Chicago demo previously seen at E3 2011. In that demo, 47’s mission was to sneak past the police force. In the Contracts mode, the first developer set a new mission, by killing two cops silently – the first in the back of a hidden weed field – the second in an adjacent room. Not only was the challenge set to kill each target, but to kill them in a similar way.
Challenges are set by playing the mission. When the challenge is complete, it can be sent to friends, or uploaded into a central database, where Io will pick the five best new missions set by players each week.
The reward for completing each contract is more cash, which can be spent to unlock new weapons and disguises.
It looked like a great way for the Hitman playerbase to extend the life of Hitman: Absolution well past the launch period.