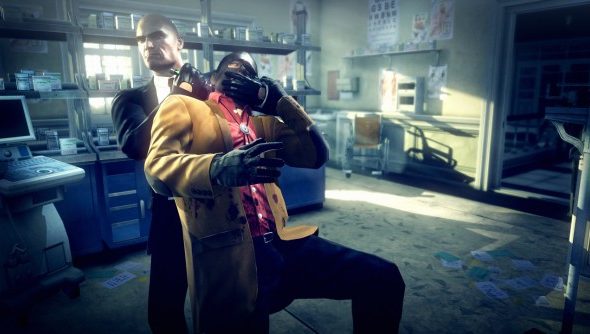 Hitman: Absolution launches in a month and a bit, November 20, but what do we know about the silent killer’s latest? Who’s being absolved? What was up with those PVC nuns? Does he have lots of different suits, or just a few that he gets dry cleaned after each mission? Does he have a QR code on his bum? So many questions! In an effort to clear things up, here’s everything we know about Hitman: Absolution.

Hello, you’re reading the Hitmanchannel atPCGamesN. We’re a new site that combines original journalism, user submissions and the best headlines from across the web. Feel free to comment or follow us on our Hitman Twitteraccount for regular updates.

Framed for a crime he didn’t commit! Or something like that. I’m sure 47’s committed enough crimes in his time to warrant at least an investigation, but Absolution’s plot sees the hitman pursued by police, forced to defend himself and evade capture. 47 is tasked with assassinating his former agency handler, Diana Burnwood, a hit which leads him to become entangled in a conspiracy led by devious, pyschoticSoutherner Blake Dexter. In Absolution, 47 will be just as big a target as the folks he’s attempting to track down.

You get to dress up

As per tradition, Agent 47’s true passion is sartorial. He’s using this hitman business simply as a conduit for his dress-up fantasies, and so far we’ve seen him disguised as a priest, a sheriff, a barber, a chef, a mechanic anda plumber. Almost any outfit can be used as a disguise, which affords you access to previously restricted areas. Like discos.That said, people sharing your outfit will be suspicious of your unfamiliar face. As Family Guy put it: “Hey, you’re not a pilot! I know every pilot in the world!”. See every

There are loads of weapons

For a game that’s ostensibly about keeping very quiet, Absolution comes with a vast armoury of guns and explosivesto play with. 47’s dual Ballers return, as does his signature fibrewire, and all manner of household items can be wielded as deadly melee weapons: from plungers and busts to bottles and bongs. The real challenge in playing stealthily won’t just come from sharp-eyed guards and 47’s physics-enabled red tiefluttering around corners, it’ll come from all the massive guns the game keeps leaving in your path.

Well, you’ve got what Io Interactive are calling ‘Instinct’, a resource that can beput to a number of different uses. Primarily it’s used to see enemies through walls, a la Assassin’s Creed’s eagle vision. In this view, you can also see the paths that patrolling guards and other NPCs are about to take, marked by a flaming trail along the floor. Instinct is also used to reduce suspicion towards you when disguised, to identify useful objects in the environment and to perform instant executions with ranged weapons. It’s limited however, and recharges as you evade detection, take down enemies and hide bodies.

47’s original voice actor is back

Actor David Bateson will reprise his role as the stoney-faced, unflinching murderman Agent 47.Bateson is also bald, so he doesn’t even have to try very hard.

You can create your own missions

In Hitman Contracts mode you can create your own mission within the main campaign’s levels by selecting any NPC as a target. Cleverly, you design missions by playing them as you normally would, hitting E on an NPC to mark them as a target, killing them with your chosen weapon and exiting the scene. Once finished, all of the choices you made —the weapon you used, the exit you took, the disguises you adopted —become the conditions of the contract. You create as you play, which prevents impossible contracts and negates the need for any sort of editor. Smart stuff.Playing contracts rewards you with cash, which can be spent on more weapons and costumes.Io Interactive show how it’s done in this playthrough:

It will look beautifulon PC