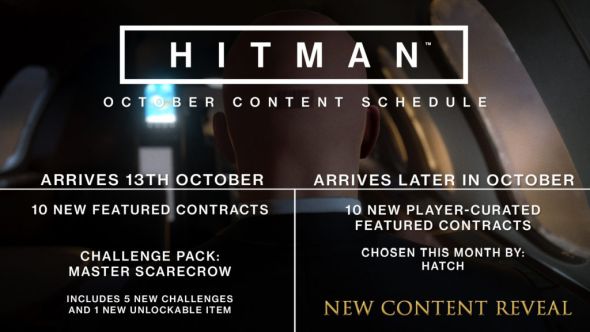 October looks like it’ll be a big month for Hitman. As well as 20 new featured contracts released throughout the month, IO are teasing a something new, which they’ll announce at the end of the month.

Check out our list of the best stealth games.

In a post detailing their content schedule for October, the developers say that they’ll “reveal brand new content for the game” on October 24. Sadly though, that’s not going to be Season 2, something they’re keen to make clear now in order to “keep expectations in check.”

As well as whatever the new content is, the developers are bringing in the same monthly content we’ve seen for the past few months. That includes ten new featured contracts from IO, and another ten from Hitman speedrunner Hatch, as part of the player-curated contract selection. There’ll also be a new Challenge Pack for Colorado, which will be the maps first new set of challenges.