An ice cream parlour is brimming with middle-class holidaymakers in the sleepy town square, which is surrounded by peach and yellow houses whose colours have faded from years of summer sun, patches of medieval brickwork peering out from underneath where the paint has peeled away. A crumbling castle watchtower irrupts into the clear blue skies, providing the image for what’s no doubt the best-selling postcard in the town. Sapienza is an idyllic mediterranean town that makes you wish for the upcoming summer to arrive sooner, and yearn for those gone by.

Looking for more great games on the horizon? Check out the best upcoming games on PC.

The only thing tainting this scene is the austere figure of of a bald-headed man in a black suit, leather gloves, and a barcode on the back of his head. Not that anyone seems to have noticed…

Even before I went hands-on with Sapienza, the upcoming second episode of Hitman (it still feels strange to refer to a triple-A game like a TV show…), I had a good feeling from my developer flyaround that it would be a big improvement on episode one. I mentioned last month that Hitman works best when placing 47 in seemingly everyday spaces – a suburban house, a party, a street festival – and we make the journey with him from normality to cold, clean murder. Whereas Showstopper felt a bit sterile throughout, Sapienza captures that essence perfectly.

The mission starts in the town square, which is just one of several distinctive, yet seamlessly flowing, segments of a map that creates a great illusion of an entire small town. There is a stretch of road on a clifftop leading towards the countryside, a cobbled street that curves down to a church, beach and marina, a castle watchtower, and a mansion – where your targets, Sylvio Caruso and Francesca De Santis, can be found.

Sapienza instantly feels like a place of murderous opportunity; a place that looks perfectly innocuous, but is in fact filled with meticulously designed puzzles for you to solve. I’m immediately grabbed by the ice cream parlour, wondering how this can possibly get me closer to my target several hundred yards away in his tightly-guarded abode.

As I ponder the possibilities for death via ice cream, I overhear a man at the cafe talking on the phone. Whether you’re looking for some light amusement or crucial mission information, eavesdropping is always rewarding in Hitman, so I stand right next to him in that comically conspicuous way you’re always allowed to get away with, and listen in.

Lo and behold, the guy I’m listening in on is none other than Caruso’s psychiatrist, getting ready to meet my target and unpick his brain. Seeing as I, in my own way, also have intentions for Caruso’s brain, I decide that posing as the shrink is my ticket into the building. 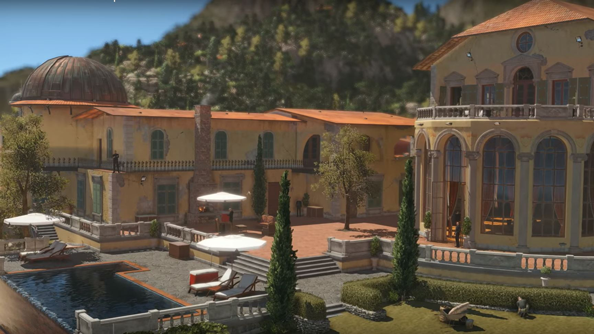 There is indeed a connection between the shrink and the ice cream parlour, but breaking into the building through a back-alley, I accidentally take a wrong turn and stumble into a grand, wood-panelled office that also must present some kind of opportunity that I’m as yet unaware of. Sapienza does a great job of instilling a haphazard sense of discovering new avenues to assassination; much like a real medieval town, it’s full of surprising little nooks and crannies that make you feel like you happen upon them adventitiously, but are actually cleverly directed (unlike Showstopper, which to me feels like a synthetic, symmetrical hive of dark, samey rooms).

There are quite a few buildings you can enter off Sapienza’s streets, each of which has a distinctive character. I give up on trying to impersonate the psychiatrist, instead breaking into someone’s home in a block of flats, then killing them to nab an outfit that gains me access to the mansion grounds. This section (supplemented by the Italian setting, no doubt) feels like a self-contained mob hit mission – a cold doorstep killing worthy of the game’s title.

Before heading on into the mansion, I go for a stroll around town – summer, after all, is some months away and there are few levels in games that do so well at capturing that holiday feeling. Bimbling down to the seafront, I scope out the local church, and discover that, of all the outfits 47’s worn over the years, the Italian priest outfit – complete with wide-brimmed capello romano hat – looks particularly swish on him. It’s somewhat fitting given his conflicted relationship with religion, which over the years has included living in solitude with a priest in Sicily, donating his earnings to the Catholic church and, er, killing a group of scantily-clad female assassins dressed as nuns (thanks for that, Absolution). 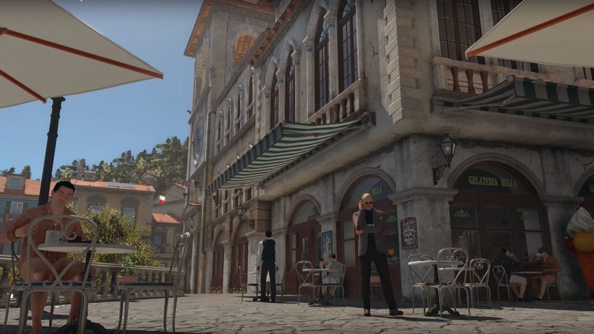 I don’t find much in the seafront area relating to my main targets, and my guess is that the area is geared more towards escalations and contracts than it is the canonical kills. Which is fine, as the diverse, multilayered design of Sapienza should ensure that each of these will feel sufficiently distinctive, offering new puzzles and approaches that you wouldn’t have experienced on previous playthroughs.

With time running out, I head up to the mansion, as much to explore its insides as to complete my assignment. I get in there disguised as a cook for Caruso who was too lazy to go into work on his first day, so I simply stepped up to take his place (after garrotting him in his home). The mansion is full of its own pitfalls and puzzles to be wary of, featuring a separate kitchen building, and large grounds populated by gardeners and one of those tractor-lawnmower things (that I’m still kicking myself for not trying to drive).

Once I’m inside, exploring the mansion is a taut affair, recalling the Sicily mission at the start of Hitman 2, albeit with the detail and gloss of Showstopper. I stumble upon (for reasons unknown) a plague doctor’s uniform and a circumcision knife – which, it would seem, is as effective at cutting throats as genitalia. 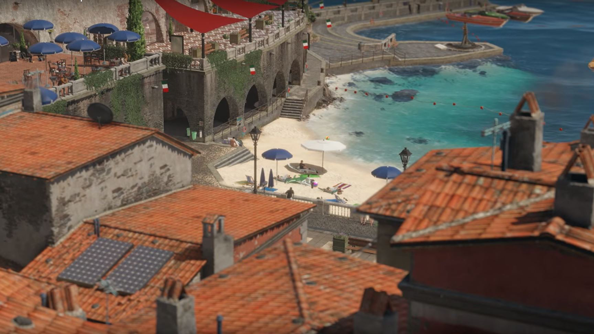 In the end, I utilise my cook outfit to take care of Caruso. Unable to find any rat poison, I obediently help prepare his dinner in the kitchen, then deliver it with the head chef to his isolated table, on a porch overlooking the sea. As I stand behind my prey, the chef lingers nearby, and I realise that he’s going to have to go too – payback, I tell myself, for when he berated me back in the kitchen. Thankfully, the speedy double-headshot is a well-rehearsed move for any Hitman veteran, and I duly ensure that this supper is Caruso’s last.

I do kind of wish that as I shot Caruso he threw his face into his plate of food with exaggerated force, toppling the table and sending spaghetti flying à la The Godfather, but the hit was devoid of any such fanfare. It was clean and quiet, just as I’ve always liked to do things in Hitman, though I did get a tad envious when I looked over and saw what one of the other players found in the medieval watchtower to complete the mission – but I’ll say no more.

There’ll be plenty of time to get more creative with the killing when tmission gets released later this month, but simply exploring the town and envisioning the assassinatory adventures that await is a pleasure in itself. With its diverse design and attractive setting, Sapienza looks set to rank among the series’ finest levels, and should reassure those who felt lukewarm about Showstopper that this strange Hitman experiment may work out after all.