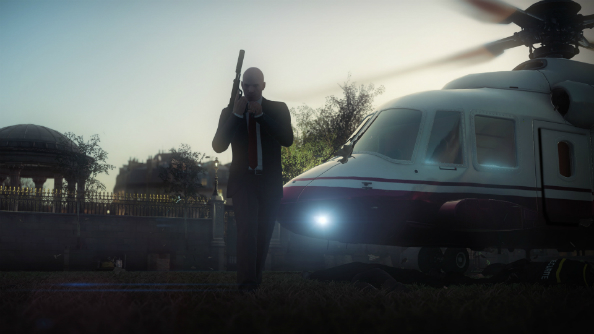 Well this is good news. IO have just announced Hitman will support DirectX 12 when the game launches on PC. The Swedish developer promises this will not only lead to better multi-threading, and increased performance when the game is bound by your CPU, but it should also make 47’s latest wet work fest easier to run at 4K.

Hitman’s first episode is out real soon. In the meantime, here are some more upcoming PC games we’re looking forward to.

IO revealed the news at the PC Gamer Weekender during a presentation, marking Hitman as one of the first triple-A titles to support the fancy new graphical architecture. The key DirectX 12 features to look forward to are as follows:

Providing you’ve got a GPU that supports DirectX 12, you should be looking at some rather lovely performance boosts. Of course, seeing as the recentPC beta was riddled with framerate issues, it’s probably best to err on the side of caution until Hitman’s release date on March 11th.

Very Biased Reviews is also reporting some additional juicy details that snuck out of IO’s conference. Apparently, Hitman’s new ‘elusive targets’ were discussed in more detail; a feature which points to 47’s episodic murder parade being more emergent than its predecessors. “This is a target, one or multiple characters, sometimes with bodyguards, who spawn for a certain amount of time in the universe,” the site reports. “However, if you miss your chance to kill them, you’ve missed it forever.”

Going the extra mile to seek these targets out should be worth your while, as knocking them over will reward the slaphead assassin with goodies. “As you complete elusive targets, you unlock custom suits – for example the iconic suit from Hitman Blood Money,” reports VBR.

Procedural character generation was also talked about, with IO promising its updated Glacier Engine is now able to mix and match NPC clothe types to ensure levels are less flooded by seas of obvious twins – I’m looking at you, Mardi Gras hit from Blood Money. VBR reports the engine combines “different hats, different trousers and different t-shirts” when generating crowds to give those trademark packed posses a more bespoke look.

The site also claims IO briefly mentioned the sort of hardware you’ll need to run the game at 4K. “Hitman is able render its textures in 4k and they claim it is “playable on enthusiast cards (AMD FuryX @45fps).” Seeing as I could barely get the beta to run at 30fps at 2160p using two 980 TIs, I can only assume DirectX must have quite the beneficial impact on performance. At any rate, there’s not long to wait now to see if IO and 47 can fulfill these murderously exciting promises.