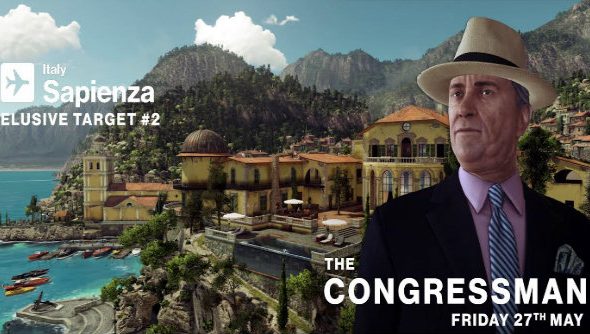 We might have had to wait a while for our first time-sensitive Elusive Target to land, but we’re getting our second just two weeks later. That’s right, you’ll only get one shot at your next Elusive Target on May 27.

In the mood for more freeform violence? Check out our list of PC’s best sandbox games.

Did you play Hitman’s first Elusive Target? I took out The Forger by walking in dressed as a waiter and pulling out my silenced pistol, shooting the target and his bodyguard in the head. Not the cleanest of kills, but nobody saw and I escaped without raising the alarm.

Knowing you only have one shot at it really heightens the tension. The reason I went for the classic silenced pistol kill was because I wanted to just get in and out. The longer I spent in Paris the more chance of failure. It really raises the stakes, because if you mess up the mission is gone forever. Having to manually identify them also forces you to take risks.

The first person to complete it really didn’t want to hang around either, as someone managed to take out The Forger within six minutes of the contract going live. Square Enix released some completion stats and they’re rather enlightening. Only 53% of people who attempted it managed to escape. Have a look at the infographic below: 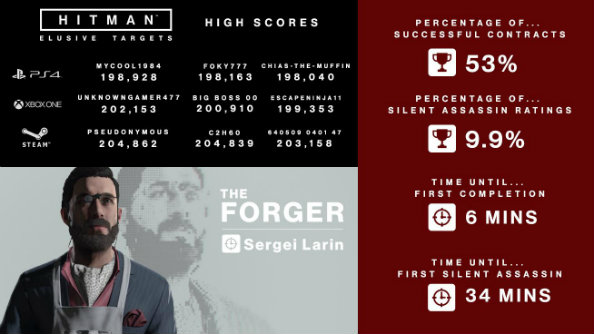 The next Elusive Target takes us back to the Italian coastal town of Sapienza to find and kill a congressman. Whereas much of the main Sapienza mission takes place within the mansion grounds and the hidden lab, this is more likely to go down on the streets, which could make for an interesting hit.

Hitman’s second Elusive Target launches on May 27. Let us know your triumphs and failures in the comments.