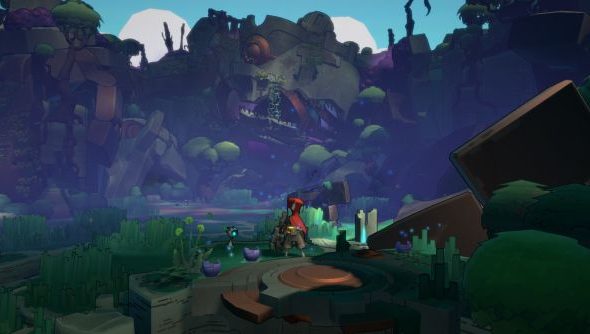 Runic Games have just announced Hob, a game about an unknown protagonist waking up to explore a cartoony, mysterious planet devoid of friendly life. Said main character is a small, ball-headed robot-looking guy with a cape and an oversized metal arm. The world he has found himself in is always reshaping itself and will contain no load screens, using new tech to constantly stream the next horizon in.

There’s a lot more details in an interview with the studioon Polygon. After Torchlight 2 shipped and a little bit of time working on a new space game, two co-founders left the company to go it alone. This was a major shake up for Runic, and they’ve spent a lot of time trying to get back on track while creating the technology required to bring Hob to life. In the words of Rick Lesley, a level designer, here’s what’s at the core of Hob:

“One of the themes we’re stressing is wonder and a little bit of mystery. We don’t want to call things out for the player. We want them to piece some things together for themselves and really feel pulled in different directions. We want them to feel inclined to look around and not just move forward.”

Callouts were made to Ico and Shadow of the Colossus as inspirations for this combo of exploration and monster-slaying, which will apparently play a bit like Zelda. Screenshots show our avatar – who remains nameless, with his smaller robotic companion likely being the eponymous Hob – scaling walls by clinging to vines. There’s also concept art of building-sized robots called Titans, though their role is as yet unknown.

Progression is of the item-finding, skill-unlocking Metroid style, with the added complication of a blocky world that will sometimes change in front of you, as seen in the trailer. Why any of that’s happening and who you are form the basis of a plot that’s so far gone totally unmentioned. A release date is similarly unrevealed, though it will be playable at PAX next week.