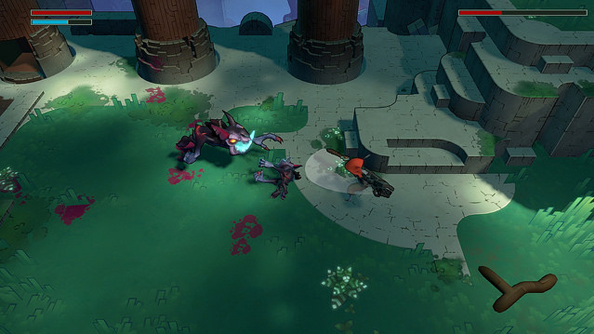 With Torchlight and its sequel, Runic kept the action RPG flame burning in a time before Diablo III (and then, after it arrived, for at least a year before Diablo III was good). But now that the genre is revived, they’re free to explore other urges. Hob is an “exploration adventure”, set on a lush, living world hosting a hidden violence that belies its pastoral beauty.

Have you incrementally improved a character all the way to the end of the best RPGs on PC?

Here’s the ‘announcement trailer’ – though Hob was actually announced a few months back.

As a solitary character crippled by an early attack and fitted with a mechanical arm, you’re opened to new possibilities of augmentation: shields, grappling hooks and an ability to shift the blocks of the world about. There’s a Zelda-like aspect here, with new areas becoming accessible as you realign your environments.

“You can think of our world as a Rubik’s cube collapsed on itself,” say Runic. “This shifting will also affect the areas you’ve already explored, and things will probably be different when you go back to look.”

If the details sound sketchy, it’s deliberate. Runic plan to drop us into their new game without any dialogue or backstory, and reward us with (metaphorical, not collectible) pieces of the jigsaw as we play.

Sound like your sort of thing? It’s expected “soon” on PC.