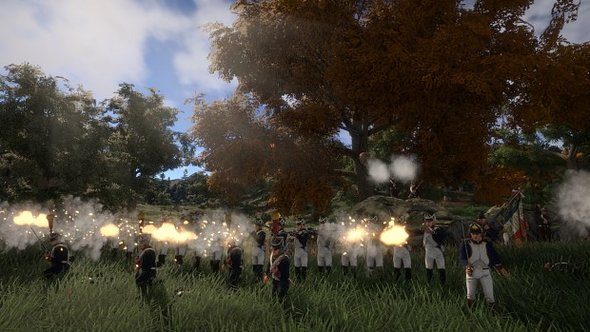 When it comes to shooters, the whole Napoleonic era would appear to be a veritable goldmine of untapped potential. Perhaps a lot of studios feel that manually reloading your musket for half an hour while someone slowly walks up to you and turns you into kebab meat isn’t a big seller. But there’s no denying that some of history’s most legendary battles were fought on the fields and seas of Europe at the turn of the 19th century. It is those very battles which Holdfast: Nations At War intends to deliver to your PC.

If you prefer your war with a little more 20th century then check out our list of the best World War II games.

Shooting up to the top 100 on Steam Greenlight in just over 24 hours, Holdfast: NaW has caused quite a stir, with many commenters dubbing it a spiritual successor to 2010’s Mount & Blade: Warband. Holdfast promises heated multiplayer combat on both land and sea. Naval battles will allow the player to choose for multiple roles, including surgeon, captain, sailor and officer, forcing a focus on teamplay and co-operation to keep your vessel afloat. Land battles will take place on a multitude of maps, allowing you to storm enemy fortifications, support the fight from the rear with artillery fire or participate in line battles at the heart of the skirmishing.

There also appears to be some degree of factional affiliation, allowing players to choose between French emperor Napoleon’s army or take the King’s shilling and fight for the limey Brits!

There is no release date at the moment, but you can check out the Steam Greenlight page for more info and give it an upvote if you want to see it pushed through to the store.