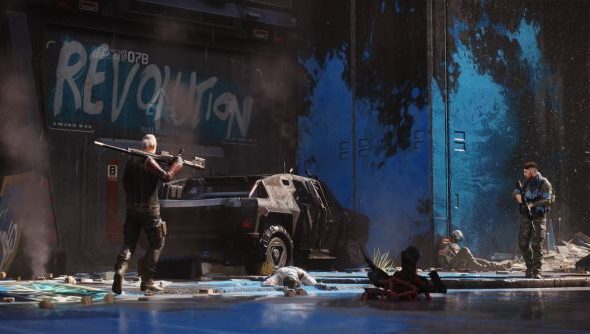 The saga of Homefront: The Revolution is long and weary, but somehow the game is not only still coming out, but just around the corner. It’s due in May, and the latest trailer is all about how you’ll be throwing a lot of molotovs in the hope they will kill a few North Korean invaders. This is all footage from the single-player campaign, which looks just as grim as the original.

We’ve taken a longer, more in-depth look at Homefront: The Revolution’s single-player – and come up with seven reasons why it might surprise you.

The trailer, titled Ignite, shows off what will be possible when you band together with the other inhabitants of future-Philadelphia and rise up against the invaders.

There’s quite literally a mechanic for this in-game called Hearts and Minds, which represents how many you’ve managed to bring to your cause. As you increase it, the open world changes to be more friendly to you, less to your enemies, and this serves as a form of progression.

It will also mean, presumably, a lot more firebombs thrown at peacefully sitting vehicles. Look, I’m positive the various men in standard totalitarian regime uniforms are bad guys, but what did that poor armoured car ever do to you, eh? Have some respect.

Game’s out in May, launching on the 17th in America, 20th elsewhere. It’s doing mighty well for a franchise everyone assumed would go down with THQ, resurrected by Deep Silver and kept aloft through Crytek’s troubles. Now Dambuster Studios are the ones to tell the rest of the story, the original Homefront covering from the invasion to the US retaking the western states. Presumably, that increased military presence on the continent will play into Philadelphia’s story as well.