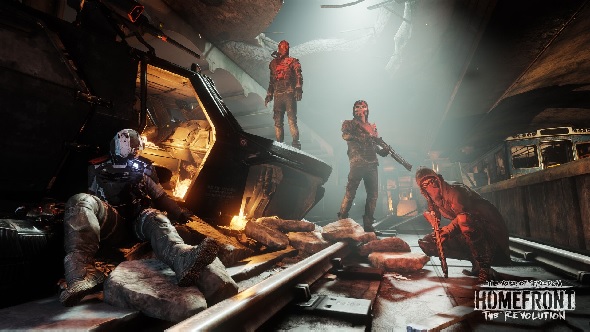 Dambuster Studios have today announced the first single-player DLC for their dystopian open world shooter, Homefront: The Revolution, along with a slew of accompanying screenshots.

Enjoy the view from behind a gun? Check out our list of the best FPS games on PC.

The DLC is called ‘The Voice of Freedom’, which is also the epithet of Benjamin Walker, the player’s character in the expansion. As Walker, you must infiltrate Occupied Philadelphia and link up with the local Resistance. Players of the main game will know that its campaign begins shortly before Walker arrives, so the DLC is essentially a prologue.

Dambuster Studios promise that your stealth and combat skills will be tested as you “encounter a sinister and hostile faction in the subways of Philadelphia – the ’90’.”

The Voice of Freedom will be free for holders of the Homefront Expansion Pass, and can be purchased separately for £4.49 via Steam.

The (rather extraordinary) premise of Homefront: The Revolution is that, in an alternate timeline, North Korea beat the rest of the world to the digital revolution. Consequently, the totalitarian state became the most powerful nation on Earth and invaded the United States. Heavy on revolutionary themes given extra heft by the setting of Philadelphia, it’s up to you and the resistance cell with whom you fight to shake off your oppressors.

Check out our review of the PC port here, but bear in mind thata recent patch has improved the game’s performance. New skins are also arriving this Friday for co-operative Resistance Mode. For full details and screenshots, take a look at the announcement on Steam.