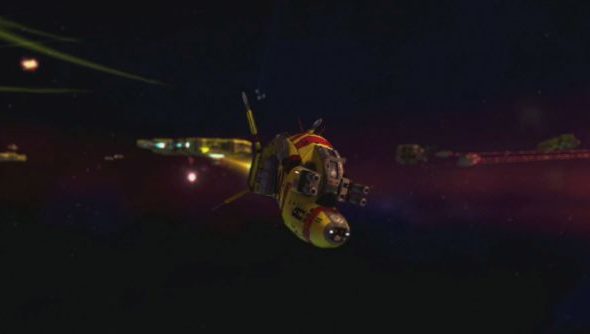 We’ll never know why Gearbox considered themselves a good fit for Relic’s beloved, bereft RTS. But perhaps all Homeworld needed was a studio coined and capable enough to jujj up the game’s engine and plonk the results on Steam.

That’s precisely the plan for Homeworld Remastered. And just in case, Gearbox have hired on half of early Relic to ensure it turns out right. Here’s what it looks like atm.

Gearbox are particularly proud of having picked up Relic co-founder Luke Moloney, who has been working on Homeworld Remastered as lead programmer.

Members of Homeworld’s original cinematics team went back to their source material and reworked the scenes in “crazy high-fidelity”.

I’m not convinced they’re better now, actually. Gearbox have opted to tone down the thick comic book lines of the intro in favour of real-time lighting and deep shadows – which is odd, given Borderlands’ famous aesthetic.

Pitchford says Gearbox have put an “incredible amount of investment into the fidelity of the ships”, however, and the new engine does do some lovely stuff with visual effects, dynamic lighting and depth-of-field blur.

And talk about sunset overdrive – those early screenshots are splashed with the rosey reds and hazy yellows that defined Homeworld’s distinctive take on the great out-atmosphere.

Homeworld Remastered will be released in a few months – hopefully by February – and be “modestly priced” on Steam. Will you want it?