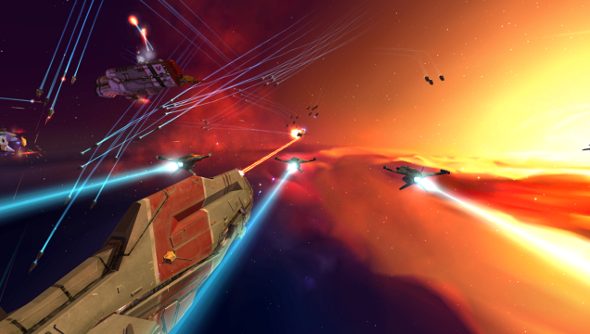 Homeworld is important. Maybe not to you, but it certainly is to me. In 1999, it showed me that RTS games could be more than games about numbers and resources, that they could be emotional, evocative experiences. I saw the future of the genre, and then I watched as that future never actually happened.

With Homeworld Remastered almost upon us, at least I’ll get to see what Homeworld would have been like if it was made today, and from the sounds of it, Gearbox has been trying to make it feel just like the original, but as we remember it, not as it was. Go read Rob’s interview on the trouble with rebuilding Homeworld. It’s great. But wait! First watch 36 minutes of the game in action.

I don’t normally post things that are over a week old, because it makes me look very slow. Which I am. Because I’m getting old. But to hell with it, this is a joy to watch. It’s almost 40 minutes of gorgeous spaceships dancing.

It’s space ballet, with each battle filled with these elegant ships, moving in perfect formation. I don’t watch many RTS eSports matches because all the fun I have with these games comes from controlling the battles, but if they all looked like Homeworld, I’d probably have multiple streams constantly running. Maybe I’m shallow. Homeworld as an eSport, could that ever be a thing?

Homeworld Remastered is due out on February 25th.