Gremlins, Inc. is Monopoly for arseholes. (Although some might argue that Monopoly is Monopoly for arseholes…) The eager capitalists are now public figures in a clockwork realm of pointy-eared engineers. The fines are bribes. In the place of the Electricity Company, there’s a factory where you might shop for votes among the electorate. Jail is jail, but Gremlins made room for the Inferno too. Literal hell.

Your goal, and that of your competitors, is to acquire as many cogs as you can – the pieces that represent power in a world run like a complicated contraption. Acquire a set number of cogs before everyone else, and you’ll be declared the most clever and cunning gremlin of all. The ways you can win that title vary wildly.

The map – mostly static and a little cramped on the monitor but dotted with lovely incidental drawings of domed dirigibles and austere, twisted buildings – is a network of interlocking pathways resembling a deranged tube map. Players slink about in fulfilment of whatever machinations they’ve settled on. It’s an arrangement best compared to that other digital dance with the dice, Talisman, or maybe one of the great family board games: you’re all pursuing your own agendas, while sticking the knife into your opponents wherever possible. 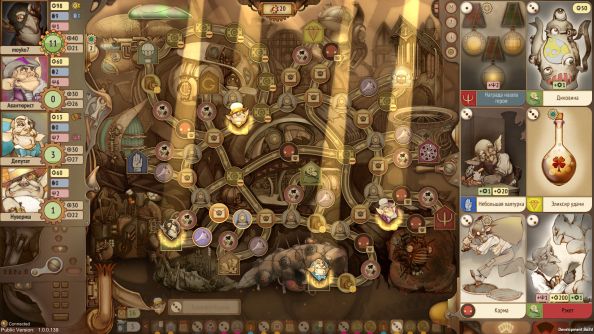 Each of the six cards in your hand is worth a certain number of movement points – or you can save them, better to cash in later at critical spots on the board where they have high value: The Office, perhaps, or The Dump. Cards bestow peculiar effects: visit the Bank to play the Secret Society card, for instance – the unsettling art presents a group of conspiring gremlins in white, conical masks – and you can exchange gold for a certain amount of sway with the people.

You’re not only dastardly businessmen, see, but demagogues. Every 20 rounds, if a snap election isn’t called sooner, players are required to compare Votes and declare the most popular Governor. Not only will the new official take home a cog, but they’ll never be thrown in jail by a deferential police force, nor pay bribes – in fact, they can pocket those of other players if they like. There’s a certain glee to be found in the barefaced shamelessness of it all.

You’ll gain gold by passing through income spots, and earn more according to how well acquainted you are with the Bank. But this is no perfect steampunk economy: you’ll frequently need to dig into your funds to pay off the state too. In fact, precision-planning your spending based on your coffers at the end of a turn only leads to frustration – especially since other player’s cards can also rob you of your cash. RTS bean-counters need not apply. 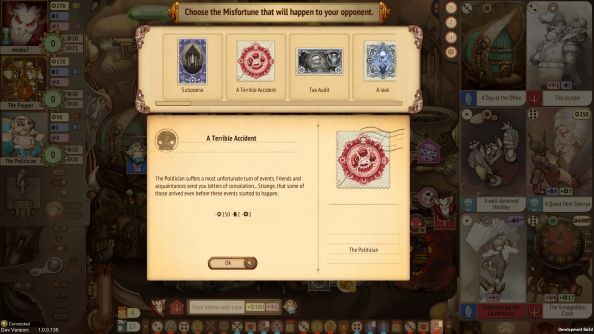 The most potent, cog-winning cards typically ask for a steep one-off payment when used, but traverse the board with purse strings tightly pulled and you might find yourself jailed by coinless cops. Sitting out several turns in prison, I’ve discovered, is a proper pain in the arse.

Turns last seconds, but games can take a lot longer as players strip each other of their cogs, accrue funds and pass the Governor’s hat back and forth, edging towards the spaces they hope might grant them a win. On a tabletop, I imagine Gremlins would happily eat an evening. In anonymous online multiplayer, busy though it is with random events, it’ll be too slow for some.

Stage enough rigged elections, fire enough misfortune at your fellows, and you’ll start to develop notoriety – measured as Malice. Stack up too much of that and your bribes will become extortionate. Your karmic imbalance will bring bad events down on your head. And if an election is called, you might lose out to a squeaky clean candidate. 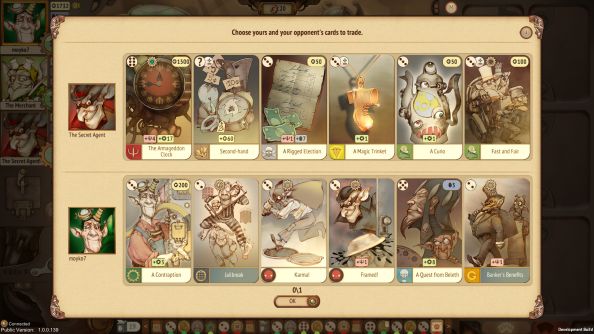 Somewhere between the turns, silent stories are told. Because most roads are one-way, players who’ve picked a nasty path can find it hard to claw their way back to the straight and narrow – instead circling the same dodgy streets in search of greater gains. The spaces around the Casino offer quick riches, but are situated dangerously close to the Jail and Inferno.

A gremlin who finds themselves too far from the Plant or Office to spend his cards there might forego those legitimate institutions altogether, in favour of casting their entire hand into the Inferno. There they might make a deal with the devil – who, it has to be said, doesn’t look so terribly different from the gremlin bankers and prosecutors with his proffered quill and thin-lipped smile.

“Mortals are cunning and treacherous,” his flavour text warns. “When buying a soul, make sure it has not been already sold to anyone else. Also, be wary of fraud.” Perhaps it’s the suited and smirking gremlins who are the real demons here. 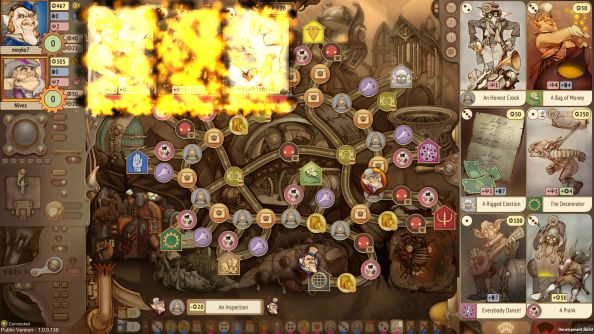 It can be tricky to keep track of what’s going on in your opponents’ turns. Their hands are concealed from view, naturally, but even the cards they do play slip by without explanation. To make sense of what’s happening, you’re sometimes left to click back through recent events and read card descriptions after the fact.

But I do wonder whether Gremlins players won’t be worse off for learning the game inside out. Maybe it’s my own inexperience talking – but there are so many moving parts, such a wealth of unpredictable events, that it seems like the perfect game to play with a group of newcomers, laughing as schemes unfold and go awry. Us PC gamers are used to playing the meta, coming to know our games in every detail. But I suspect Gremlins is best enjoyed by the seat of your well-pressed pants.