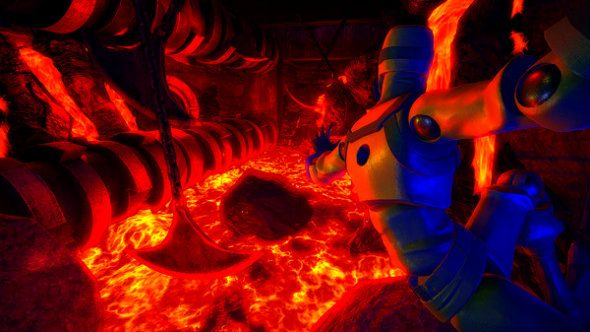 Klei Entertainment, creators of Don’t Starve, have revealed their new game, a first-person parkour adventure that relives your childhood days of hopping along cushions, sofas and scampering across tables to avoid lava. Yes, Hot Lava is childhood imagination game The Floor is Lava, but with actual lava and parkour skills.

Klei are one of the best small studios around, but here’s a bunch more of the best indie games for you to look at.

There’s not another indie studio around that outputs games as diverse as Klei does. Mark of the Ninja did 2D stealth, Don’t Starve did top-down survival and Invisible, Inc. showed they can do turn-based tactics. Every single one of those games is brilliant in its own way.

Now Klei are doing first-person parkour, and it’s probably going to be really good. Despite the shifting genres, there’s one thing Klei retain across all their games, and it’s that trademark cheeky style.

In Hot Lava, you’re traversing mundane locations like schools or a family home, but with molten lava covering the floor. There’s an Imgur album showing off some of the things the developers have been working on, from first-person animations to Terminator 2-style death animations. The game has a Steam page, but there’s no release date yet.

The trailer makes it look like great fun, so check that out below: