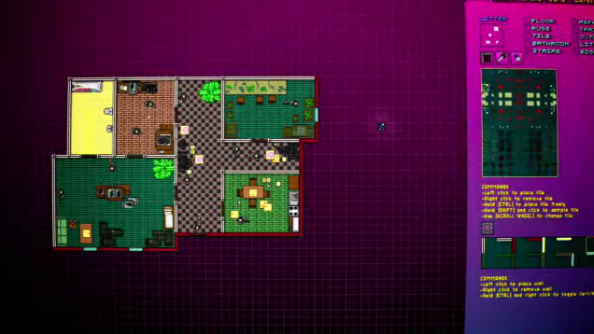 Dennaton Games’ massacre sim, Hotline Miami 2: Wrong Number, will be getting a level editor on 10th December. Despite the devs saying the planned map maker was nearly complete back in May, it’s taken eight months since the inital relase for a beta of the promised feature to launch.

Seeking out more indie gems? Check out our list of the best indie games on PC.

While people have been hacking the game via a backdoor route since launch to make their own maps, an official – and hopefully less bug-ridden – level editor will make creating a labyrinthine murder house accessible to anyone who bought the Windows version of the game on Steam. Unfortunately there is currently no promise that player maps made during the beta will be portable to the final version of the level editor.

Dennaton Games have confirmed the map maker will feature all content from the base game, from machine guns to kitchen sinks, meaning architects of frenzied murder-sprees won’t be short of tools to use while bringing their creations to life.