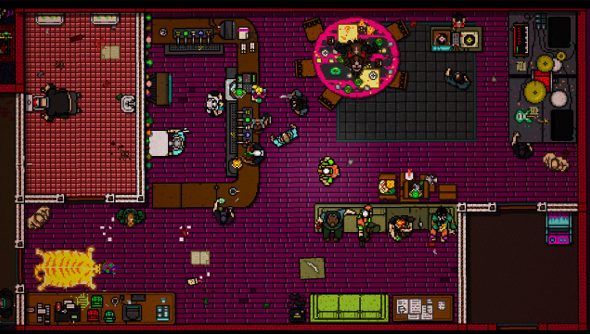 After being pushed back, last year, for tweaks and polishing, Hotline Miami 2: Wrong Number finally has a release date, and it’s not far off at all. You’ll be kicking in doors, flinging empty guns and crooks and general doing horrible things to horrible people early next month.

Dennaton Games and Devolver Digital announced the release date today, and you’ll be able to get your grubby mitts on Wrong Number on March 10th. There’s a digital special edition with six tunes plucked out of the soundtrack for you to listen to, but if you want something more tangible, you’ll need to shell out for the physical vinyl collector’s edition.

Last year, Dennaton and Overkill collaborated on some Payday 2 DLC themed around Hotline Miami, with a new heist and weapons. Now they’re at it again for Hotline Miami 2. If you buy the sequel, you’ll get 6 Hotline Miami 2 masks for Payday 2 as well as the “Jacket” character pack if you pre-order.

You can pre-order it from Steam or GOG now, if that’s your sort of thing.