It’s difficult enough for the Dota 2 community to acclimatise to change – and that game was released six months ago. How might Valve go about slotting brand new maps into Counter-Strike, a game rounded into perfection after fifteen years of gun chatter, like a pebble in the ocean?

Valve dodge the difficult decisions, if not the accountability, by deferring to cold, cruel numbers. Is the daringly new Overpass a match for the exquisite balance of a Dust or Mirage? The numbers cannot and will not lie.

After the release of a new map, the CS:GO dev team refer to round outcome data to help drive design decisions. Here’s a graph which plots the win percentages of terrorists in orange, and CTs in blue: 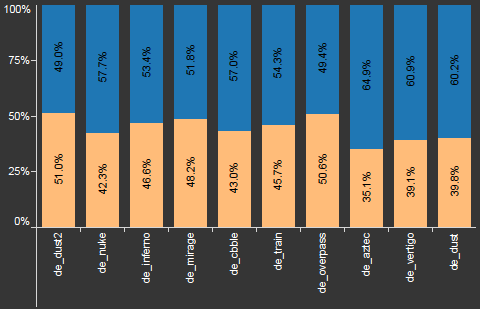 Not only is Overpass holding its own against the classics, then, but is reportedly the best balanced of the lot – a seesaw to rival Dust2. Good old de_cbble, meanwhile – revamped from Counter-Strike: Source – is on a par with Nuke, favouring CTs somewhat.

Valve dig deeper, however, looking at how players win rounds on particular maps. They divide up stats based on whether terrorists or CTs were eliminated; whether a target was bombed or successfully defused: 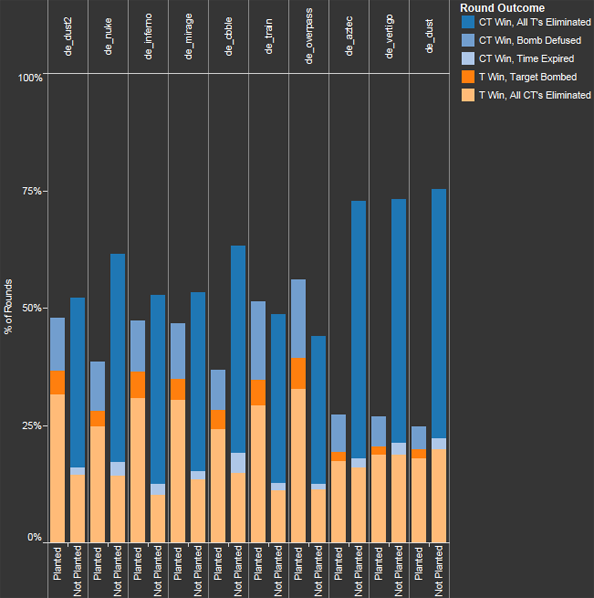 “Again, we see similarities between Nuke and Cobblestone – players tend to plant the bomb about as often,” point out the dev team. “However, this graph shows clear differences between Dust2 and Overpass: in Overpass, the bomb is planted far more frequently, but is defused much more often.”

Why are we telling you this? Because this detailed data will define the shape of Cobblestone and Overpass in the months to come, eventually determining the mould of each map. What do you lot make of that?