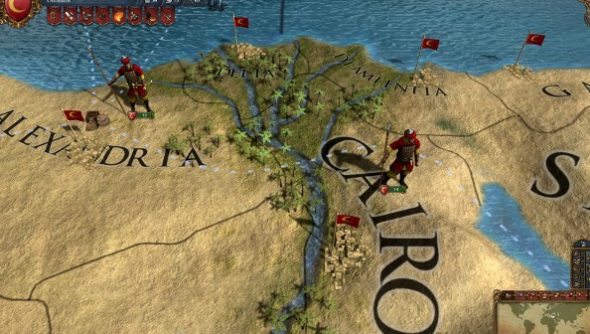 Superficially, Europa Universalis 4 looks like a marginal improvement from its predecessor. As I watched it run, snow and ice spread down from the mountains of Europe to cover most of the continent before receding in the spring melt. Frozen water is probably the most noticeable outward difference in EU4, and so it might be hard at first to understand why EU4 looks so exciting. Appearances are deceiving, however. If you know where to look, EU4 departs radically from its predecessor in several key ways.

Europa Universalis is Paradox’s flagship history simulator, a strategy series that stretches from the end of the Middle Ages to the dawn of the Industrial Era. You can shepherd any nation or country through a series of massive political, economic, and scientific changes, and your only real goals are the ones you choose from yourself. Europa Universalis isn’t about winning history, it’s about safely navigating its currents.

If that sounds exciting to you, Paradox would love to show you just how much fun Europa Universalis can be. The trouble is, all that freedom and historical sophistication (just how do you feel about balancing mercantile bourgeois interests against aristocratic militarism?) can make for a daunting learning curve. An accessible Paradox game, a Europa Universalis that’s truly universal, is Paradox’s Everest and Northwest Passage rolled into one.

Paradox are taking steps in that direction by ridding EU of its notoriously finicky, hard-to-parse sliders. Without sacrificing any depth, and in fact by adding a great many more hard choices, Paradox have created clear, choice-driven systems. They seem to be moving more toward a “nation-building as RPG” style of design.

For instance, a lot of upgrades and improvements are now tied to how many “monarch points” your ruler has accrued. Monarch points let you do anything from improving the tax administration in a province to declaring a new territory to be a part of your nation’s core, but there are only so many to go around, and they flow from the quality of your current ruler. Where in previous games you could simply spend money and advance your nation’s infrastructure instantaneously, now you have to weigh your priorities. You only have so many monarch points at a time, so what national skills do you want to improve? Making things even more interesting, the strengths and weaknesses of your ruler are supposed to have a much more decisive impact on your country. To continue with the RPG analogy, it’s almost like you’re leveling up a character, but your basic stats can change every ten or twenty years when a new person takes power. Your foreign policy might stumble when an inept brat takes the throne, but your administration might rebound when his brilliant, studious heir ascends. In the past, you could govern so well that a country becomes immune to a bad ruler, it sounds like Paradox are pushing back against that. Now, the best thing to do with a poor ruler is to recruit good ministers, so they can add their stat bonuses to the monarch’s. That helps limit the damage, but even a William Pitt can’t turn George III into Queen Elizabeth.

Similarly, national ideas now function almost like RPG talent-trees. These are doctrines and beliefs that apply global bonuses to your country, and they now come in schools of thought. You initially start with a slot for a single family of ideas (although more slots open up as history progresses). So if you want to emphasize militarism, for instance, you get a special ideas track with several distinct military-releated ideas you can activate. These ideas could give it special bonuses in combat, or help it enlarge its army at a lower cost, or enhance the speed at which armies move. Your country also has its own unique ideas that speak to its national character. So France and Germany might have slightly different bonuses reflecting the different values of their respective cultures, and they will have different values than, say, China or the Ottoman Empire. But the single biggest change might be the way trade works in EU4, and how it ties the world together. EU3 had one major drawback for a strategy game set during the Renaissance and Enlightenment: trade was practically incidental to the economic model. You didn’t really need to go find new markets and resources, and so there was scant incentive to engage in colonization and exploration.

EU4, by contrast, shows how wealth flows across the globe’s trade routes stretching from East Asia to Western Europe. Trade flows into the trade centers, and the nation that owns the trade center will make the overwhelming majority of profit from it. However, the more trade that flows into a trade center, the more it is worth. So you don’t want your country’s trade hub to be some backwater where the goods are about as exotic as the cocktail bar at a TGI Friday’s. You want it to be 19th century London or 15th century Florence, where the goods of the world flow into your warehouses and your neighbors and rivals arrive to buy them.

You can make your ports more attractive by setting your navies to patrol the nearby oceans and perhaps encourage trade traffic to divert to your trade center rather than continuing onwards. But the real money is in controlling even greater amounts of trade. Don’t just hang your shingle at the end of the trade line in Europe, but send a merchant out to Lebanon to open an office there. Now you’ll get a share of the wealth passing through there, but also be able to both more trade coming into Lebanon and the direction it takes on the way out. If you pursue trade aggressively enough, you can start causing other trade routes and trade centers to dry up while the flow of goods swells in yours, and your wealth skyrockets. The new system shows how the fortunes of European powers are never completely divorced from the rise and fall of the Ming Dynasty in China, or the strength of the Iroquois. If the system works well, it should add a new dimension to the entire game, and make the trade and colonial mechanics feel less arbitrary.

Although EU4 looks like as conservative and incremental a change as you can imagine, you can see a revolution brewing just below the surface. Europa Universalis has always put the emphasis on Europe first, but EU4 starts from the assumption that everything is tied together, and players ignore the rest of the world at their peril. Sometime next fall, we’ll see if the new approach succeeds.

{"schema":{"page":{"content":{"headline":"How Europa Universalis IV aims to be deeper and more intuitive by being an RPG where you play a nation","type":"news","category":"europa-universalis-iv"},"user":{"loginstatus":false},"game":{"publisher":"Paradox Interactive","genre":"Simulation","title":"Europa Universalis IV","genres":["Simulation"]}}}}