It’s a big shift, going from making lavish, Total War-derived tactical games like King Arthur and Lionheart: King’s Crusade to making Gothic, fast-paced action RPGs like the Incredible Adventures of Van Helsing series. But it’s a transition that Hungarian developer Neocore games have made look surprisingly easy, as their stylish art direction seem finally to have caught up with their game design. Not only if Van Helsing every bit the rich visual experience that Neocore have been known for, but it’s also a surprisingly worthy peer of Diablo and Torchlight.

The Incredible Adventures of Van Helsing 2 seems to break with Neocore past life as a wargame developer, but to hear narrative designer Viktor Juhasz tell it, it was a natural evolution.

“It wasn’t a very swift decision. It happened very gradually,” Juhasz said. “Our first big game, if I can call [King] Arthur a big game, was a role-playing wargame. …We tried to focus on the RPG element, because at this company, virtually everyone is a big RPG fan. …If you look at the switch from this perspective, it wasn’t that big a switch. Because we changed from roleplaying wargame to action RPG, so the RPG was always there.”

It was perhaps an overdue decision, focusing on the RPG elements that animated the team. King Arthur 2 received a lukewarm reception after years of build-up and promise. Rather than a “best of both worlds” kind of game, it satisfied neither wargamers nor fantasy RPG fans. Its striking art direction and brooding “fall of Camelot” setting went to waste on lacklustre melees and a grind-heavy campaign.

Neocore needed to shift gears, and their first idea really was a radical departure from the past: a children-oriented RPG about the vampire hunter Van Helsing. But as Neocore developed the project, it started getting a little darker, less kid-friendly, and a little more sophisticated..

Still, it wasn’t easy for Neocore to simply jump into a genre that was already defined by Diablo and Torchlight. Action RPGs, like MOBAs, can be deceptively simple. The core mechanics are so well-established that it’s very easy to jump from game to game… but the trade-off is that players have enormously high expectation for a game should feel. The difficulty is in balancing that familiarity against the need to do something different from what players have already been doing for years. 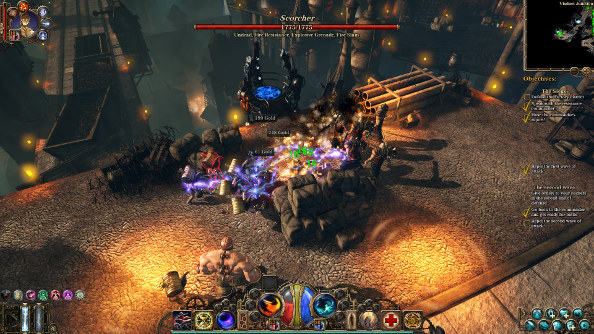 “It can be really frightening when you decide to enter a field where these giants are playing,” Juhasz said. “So we really wanted to focus on a couple of things that we thought were missing from Diablo or Torchlight, and these two elements that we tried to flesh out were the importance of the main character and the importance of the background world.”

For most studios, a focus on setting and character can be a risky proposition. I’ll be the first to admit that the moment a developer starts talking about their “rich lore” I’m ready to head for the hills.

But in Neocore’s case, the decision makes sense. They can take a simple idea and make it distinctive because they’re an evocative studio. Say what you will about King Arthur, it was a stylish and moody game that hinted at an exciting and magical world that its gameplay only occasionally delivered. But in the more straightforward genre action RPG, Neocore are able to play to their considerable visual strengths. Backgrounds ARE settings in an action RPG. A sharply drawn character with some good voice-acting can take the imagination awfully far.

But of course, this is an old lesson that Juhasz and Neocore had already absorbed from the era of the classic B-movie monster flick, of the sort that made Bela Lugosi and Lon Chaney, Jr. into household names. Neocore wanted their world to seem like the kind of place that spawned those iconic bad guys, with their elegant menace. 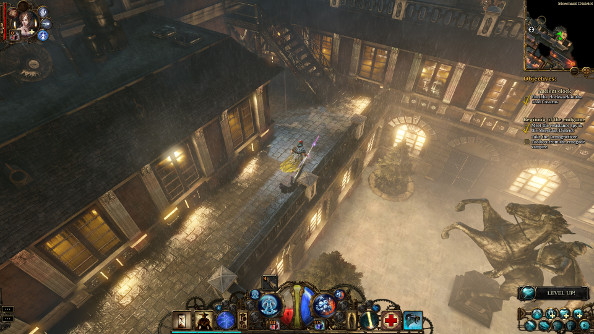 “We wanted to create Borgovia, this fictional Eastern European country… that never existed, but anyone who ever watched an old classic horror film is familiar with,” Juhasz said. “Monsters, and crumbling castles, and crooked houses. That was one of the main inspirations. And then I wanted to mix it with the traditional old school pop stories: the mad scientist, the strange devices, the abominations from the laboratories, and all sorts of crazy ideas. And the guiding principle here was to create something very gothic and very pulp.”

The action RPG genre trades in tropes even more than your average fantasy RPG. There’s not a whole lot of room for subtlety in a genre that is about sprinting into the next room, murdering everything you find, sucking up all the loot, and then repeating the process. But while Diablo and its imitators have always used the very thinnest of veneers to explain exactly what the hell it is you’re doing, Neocore saw characterization and world-building as a way to set their efforts apart.

But they weren’t sure they were on the right track until they released their first game. While Van Helsing 1 didn’t garner brilliant reviews, the critics largely liked Neocore’s direction.

“We wanted to create something new in the background and in the characterization of the story. I wouldn’t say we were frightened, but we were very eager to know the reception. And the good thing was the first wave of feedback after we released the first game was that we wanted to achieve,” Juhasz said. “People sort of liked the world. They liked the main characters. And that was one of the things that sort of made Van Helsing a bit different. So I think it worked out quite well.”

With this new effort, Neocore have been able to focus on the fundamentals while improved tech has allowed an even more lavish world. 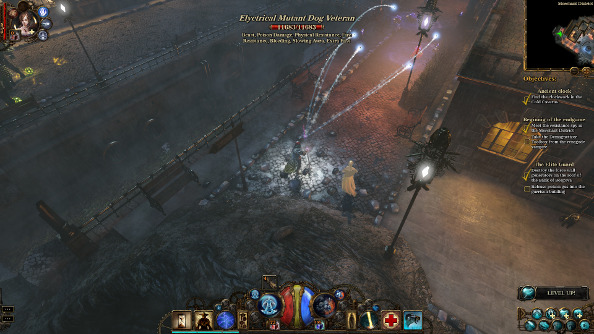 “We learned quite a lot. Storytelling-wise, I learned that there are certain limits to an action RPG. Certain limits to the way you tell a story,” Juhasz admitted. “There are also limits to the abilities action RPGs can give you. So personally, I learned how to create a story that fits the action RPGs better. And technically, we improved quite a lot of things. For instance, we missed the Gothic rains and fogs in the first game, and finally we could create them here.”

The big difference between Van Helsing and its influences is that Van Helsing is not afraid to throw a lot of options at the player. Character classes are more fluid and less distinct in Van Helsing, and there is an unbelievable amount of customization you can do. That Hunter could be a tanky brawler or an elusive sniper, or a high-damage berserker whose only hope of survival is to kill enemies so quickly that they don’t have a chance to kill him. And, oh what the hell, why shouldn’t he be able to cast spells?

“We wanted to create and action RPG where basically you can do as many things as you want. We didn’t want to limit the mechanics to one particular class,” Juhasz said. “You can find your perfect style where you are comfortable. …We wanted players to be free to customize their character, to try and build different characters. To try to achieve the goal from various directions. And that was a core idea all along. That was the guiding principle.”

This commitment to always giving the player more of everything makes The Incredible Adventures of Van Helsing 2 an enjoyably old-fashioned experience. It’s not so streamlined as Diablo 3 is, and sometimes the option it gives you seem a little hard to assess. But there is always more to play with, another twist to the way you can play your character.

It’s so well-produced that it’s easy to forget this is something of a “budget” title. Like Torchlight, Neocore’s Van Helsing seems to be predicated on the idea that it’s better to lower the barrier to entry and get a lot of people playing than make them gut-check themselves about how much they want a new flavor of monster mash. It’s a wise decision. Neocore have made game that’s always surprisingly generous. Most importantly, it’s finally the game that aligns with their best strengths. After some big setbacks, Neocore are finally putting their best foot forward.