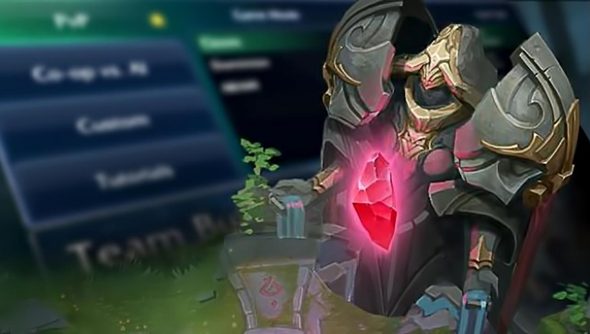 Riot have been working to update Summoner’s Rift, the primary playground in League of Legends, for the best part of six months now. They’re stripping away the polygonal menhirs that date the five-year-old game, and ensuring that everything is instantly readable.

Here’s what the art team are doing to make sure there’s as little as possible mediating between the player and a great play.

Riot are shooting for a kind of timelessness with their new Summoner’s Rift – something that escapes past technological restraints, retains the vibe of the “inviting, magic-infused forest”, and keeps players in the loop as to what the hell’s going on.

Building clarity has been a matter of removing visual clutter. LoL communicates a “ton” of information to the player every second – so there’s no room for any noise that isn’t useful, accurate, or easily digestible.

“This means simplifying shapes and values to make for easy visual reads no matter where you are on the map or what you’re looking at,” explained Riot lead artist Oliver Chipping. “The map should always relate to the champions, but it also needs to sit behind and frame them clearly as players run around shooting off abilities in groups of up to 10 at a time.”

Part of that is establishing a visual hierarchy – with the background at the bottom, and characters, visual effects and finally UI layered on top. The new UI is as “slim and as small as possible”.

Riot have also been thinking about ‘flow’ – the way the Rift’s art can subtly lead players down particular paths and help them understand where they need to be.

The resulting update shouldn’t leave low-end PCs chugging, either. What do you make of the changes so far?