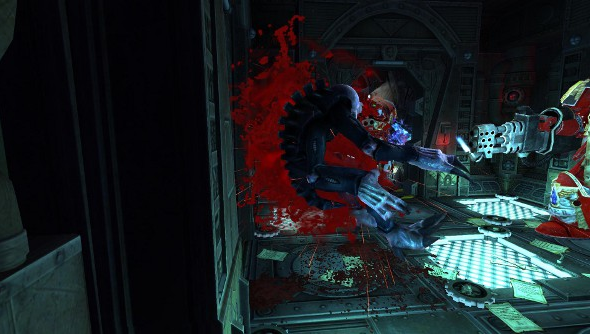 Playing Space Hulk these last couple weeks, I started to think about wishes and the dangers of having them granted. Players keep asking for better versions of old classics and ports of games, and there is no shortage of developers who want to provide them. I’m not above this. I was as excited for Space Hulk as anyone, in part because the board game was unavailable to me for so long.

But I think Space Hulk was a good adaptation and a middling PC game. It’s a study in how game design is dependent on context and medium, and the risks of removing a game from its natural setting.

When I reviewed Space Hulk for IGN, I talked about how so much of the game just seemed to happen on its own. “A meat-grinder on autopilot” was how I described the feeling of running a successful mission. The Blood Angel Terminators would park their fat, metal-encased asses at crucial choke points, go into an “overwatch” mode so decisive that you wonder why Space Marines should ever move at all, and then churn through wave upon wave of Tyranid Genestealers.

By all accounts, this is Space Hulk. The day I filed my review, I went to a board gaming party at a friend’s house and he said, unprompted, “Man, the only thing I remember from playing that in college is Overwatch. Is that still a thing?” Oh, brother, is it ever still a thing.

And possibly not a bad thing when you are playing Space Hulk the way it was meant to be played: in a cozy kitchen or den with another 40K nerd sitting across from you, and drinks and snacks aplenty to grease the wheels. Maybe, when a friend is pushing those Genestealers down a narrow hallway towards you and you’ve just used your last command point to unjam a weapon, maybe that becomes a great gaming experience. Rolling dice can be fun because they create their own drama. They also come with a false sense of agency: if you just wave your fist the right way, just impart the right luck or mojo to these plastic cubes, you’ll bring that baddie down and live to fight another day.

But PC games don’t really have dice. They have random number generators that can only mimic the result of a die roll, but not the process that makes people keep coming back to games like Risk, Memoir ‘44, and, yes, Space Hulk. Tim locked onto this when he looked at the game. If you’re going to adapt a board game to PC and tablets, you need to be thinking about how to account for this difference. You need to ask whether a game’s design is even that appealing outside of its natural context.

What computers are great at doing is doing away with what my old editor at GameShark, Bill Abner, used to call administration. Administration is all those non-play tasks you have to perform during a board game to set up the next turn, or resolve the next player action. It’s the math, it’s the setting-up of new pieces, and the drawing and shuffling of cards. This is the stuff that makes board game designers, if they know what’s good for them, very wary of adding lots of systemic complexity. A small amount of complexity can turn into a large amount of work for players as you give them more things to track.

But a computer can put all that stuff behind the curtain while players focus on their choices. Never in a million years would I want to play a tabletop Jagged Alliance 2 (and indeed, you couldn’t even make one that included both the strategic and tactical layer of that classic). But with the computer counting action points and calculating the outcome of a particular weapon firing a particular ammo load into a specific kind of body armor, you’ve got a hardcore tactical masterpiece.

But if a computer does that to your favorite board game, is the underlying game strong enough to survive? Some are, but some of them rely on that administration to give them their pacing and structure. Space Hulk stops being a game about the creeping dread of watching Genestealers close in on your position, of staking everything on a literal “last roll of the dice” and becomes a game where you move your Space Marines a few spaces, put them into overwatch, and hope for the best. The main action of the game plays out in front of you.

A port like Space Hulk begins with a deceptively simple goal: “the exact same but bigger / better / on a new platform”. But I don’t think that’s what most of us really want, when we think about adapting games to our favorite platform. By and large, we want to recapture remembered sensations and feelings, but how we arrive at those varies with the medium and the context. Anyone who seeks to adapt an old classic, or bring a board game into electronic format, needs to take this perceptual gap into account. The game we remember is often not exactly the one we played.