HP is continuing its pre-Black Friday teasers with a fresh batch of new Black Friday PC deals, and there are some fantastic discounts on its Intel Comet Lake-powered laptops today. The latest Sneak Peek deals will run all the way up to the blackest of all Fridays next week, but it would be wise to get in early if anything takes your fancy…

This 17-inch HP Laptop has got an astounding $530 knocked off the original price, that’s a massive 47% discount with this configuration at just $600. Damn. There’s got to be a catch in this right? Well, we’re talking about the latest processor generation from Intel, the 10th Gen Comet Lake CPUs, and you can pair it with a discrete AMD GPU to give it a little lift on the graphics front.

Yes, AMD and Intel working together in perfect harmony in this big-screen HP Laptop. We’re not talking super high-spec graphics power here, and you’re not going to be gaming at ultra 1080p settings, but it’s definitely better than the basic integrated graphics of the Intel processor.

You can configure this bargain HP Laptop 17t with a touch screen if you want to get greasy fingerprints all over the display, but you can save a bit of cash switching from the 1600 x 900 touch screen panel and switching to a visually superior 1080p IPS screen. Yes, you can save money and get a better display. What a world…

The Intel Core i7 10510U is a quad-core Comet Lake processor, with eight threads of CPU power and is capable of a maximum Turbo frequency of 4.9GHz. That’s a pretty spectacular speed for a mobile chip, though you’ll likely only find a couple of cores running at that speed when you really need them. 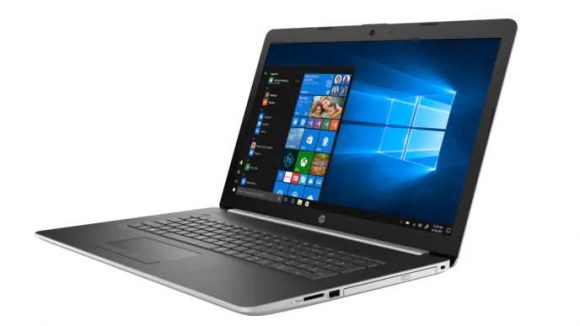 Intel’s recommended price for the chip alone is over $400, so the fact that this HP Laptop 17t is just $600 makes it a pretty spectacular bargain.

For that you’re also getting a 4GB AMD Radeon 530 GPU, 12GB of DDR4 memory, and a 256GB SSD. All of that is configurable, however, so you can play around to your heart’s content.