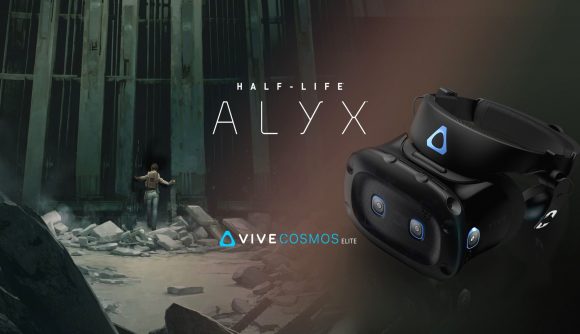 We know you’re itching to get your hands on Half-Life: Alyx as much as we are, but with Valve Index stock listing weeks and even months to arrive after purchase, it’s been looking bleak for those of us who don’t already own a VR kit. Well, worry no more, because HTC has announced that its Vive Cosmos Elite will ship with Half-Life: Alyx.

While HTC’s Vive Cosmos headset is great, one oft-reported downside is that its inside-out tracking isn’t up to par with outside-in trackers like those of the Index. That’s where the Vive Cosmos Elite comes in. The Cosmos Elite’s main brag is its outside-in ‘lighthouse’ tracking, the same sort of tracking used by the Index. This tracking uses (near-enough the same) sensors on the outside to track your movement (thus the whole ‘outside-in’ thing).

Given this, the Cosmos Elite might provide a pretty good Half-Life: Alyx experience. And while this likely wasn’t the plan to begin with (I’m sure Valve would have liked more Index stock to package with its game), it’s nice to see Valve partnering with HTC again. With Valve Index’s stock issues, and with all the hype surrounding Alyx, it’s good l to see these two companies doing what they can to get the game into people’s hands.

In HTC’s recent press release, Graham Wheeler, general manager of EMEA, HTC Vive, expressed his excitement to see how people will enjoy Half-Life: Alyx on the Vive Cosmos Elite. He also hyped up Alyx, saying it “pushes the boundaries of immersive gaming with a breathtaking VR -experience, fraught with danger, thick with tension, battling against the Combine in life-or-death showdowns.”

Half-life: Alyx’s release date is set for March 23, only a few days from now, and HTC confirmed that “the Vive Cosmos Elite bundle retails for £899 and launches today worldwide.” Get your hands on it while you can, folks! We know how quick VR headsets are being snapped up these days.