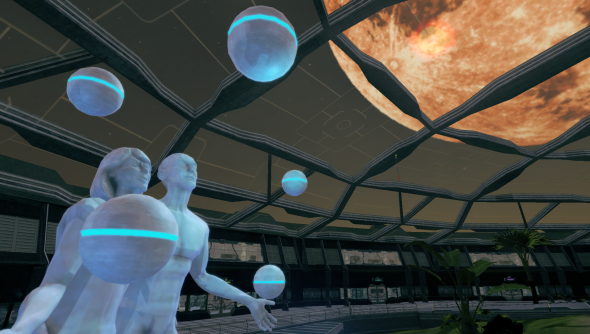 Human Orbit lets you be as evil or benevolent a meddler as you like. You can make the dreams of your AI crew come true, promoting one from the janitor of your small space station to its captain, you can get the rugged algae farmer they fancy to fall head over heels for them, or you could throw them out an airlock.

Human Orbit is like a giant sociology experiment. You’ve a hundred intelligent NPCs locked into a space station orbiting an alien planet and you’re subtly controlling them through a malfunctioning droid.

“We started off looking at bottle episodes in scifi programmes,” Karl Yeates, creative director on Human Orbit recalls. “They’re usually about how people interact in closed, confined environments. But it’s developed into a true simulation of a society, so the NPCs are actually doing their jobs, they’re having feelings about their jobs and each other. What they do in the job and the performance makes a difference to the running of the ship. It’s not a broad simulation because it’s all in this closed ship environment but it’s a deep one.”

Autelia’s been working on Human Orbit’s AI for about two years now and assure me that when they say it’s advanced they aren’t using a Molyneux-ism. “Everyone says they have very advanced AI,” Yeates says, “but what they mean is a character burns the toast and then gets scared and hides under the bed.”

Each NPC has a personality determined by a set of sliders. Some of your crew will be more compassionate than others, introverted, or neurotic. The AI works through “a broadcast system,” Yeates explains. “As an NPC walks about the ship various items are shouting out their status and if that NPC passes checks based on their various personality traits they decide if they’re interested in that information and then what to do with it.”

Back when Autelia were first building the AI they could only elicit simple reactions out of their NPCs. “We had people walking around the ship and the only things they could experience were thirst, hunger, anger, and resentment.There were lots of fights,” Yeates remembers. “Two guys would see a chair, one would sit down because he’s slightly more assertive and the other guy would feel resentful about it and slights him in some way later on.” Like ejecting him out of an airlock. 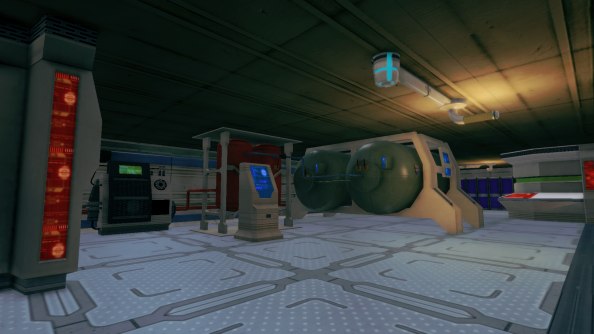 Your role in all this is to meddle with these AI people however you wish. Your control’s more subtle than in most god games as you’re basically a floating camera with no arms or legs. You can dock with other droids that let you manipulate the environment but your real control comes from hacking. You can hack into the NPC denizens’ computers, alter their emails and orders, and you can hack into pretty much any system on the station to make changes.

“The systems on the ship are all working systems,” Yeates tells me. For instance, food is made in a multistage process overseen by the NPCs. There are giant algae vats on the ship which are harvested and then processed into a nutritious paste that’s then 3D printed into food-like shapes. You can make alterations at any stage. You could add something incredibly addictive to the algae – “they test out the cultures but you can mess up their results and that will carry on throughout the whole process. The crew would perform less well at their jobs and slowly the ship would fall to pieces.”

“I wouldn’t say there’s defined goals,” Yeates says, explaining Human Orbits sandbox core. “There’s small goals, like you gradually build up your power by gaining access to parts of the ship. It’s about exploring your environment and working towards your own goals, like if there’s a janitor you particularly like and you want to make him captain you have to work towards that.” 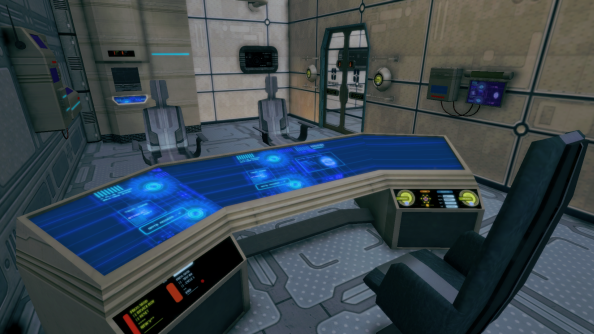 Because your control is limited it would be a long process – encourage the janitor to start a relationship with people above him in the chain of command, adjusting his emails so he doesn’t come across as an introverted psychopath; enroll him in relevant training programs; and, when the time is right, eject the current captain out of the airlock.

While you’re free to make your own goals, the station you inhabit has a purpose. It’s terraforming the alien world it’s stationed above. The aliens are long dead but your scientists can unearth artifacts they can bring up to the ship.

Each artifact is a mystery box until you get it into the station’s lab. “You could open one of these boxes and an alien virus reverts everyone to neanderthals or makes everyone highly aggressive,” Yeates explains. “There’s also things that don’t directly affect the crew, you might find a whole cache of advanced weapons.” This means, if members of your crew are unhappy the introduction of a large cache of alien weapons could lead to a potential mutiny.

Yeates hopes you’ll care when a disgruntled chef goes on a rampage because you’ll have a relationship with every NPC she harms. “The team you start off with in Human Orbit is probably going to be a little less than 20. I want them to be a team you identify with, they’ve got these in-depth personalities so I want the player to spend time with a few NPCs to begin with so they understand the complexity, how much of a personality they have, and learn to care for them.” The number will then increase to around about 100. “There’s this guy, Robin Dunbar, who suggested that’s the limit to the number of people you can maintain a meaningful relationship with,” Yeates explains.

Yeates hopes this will discourage you from venting the airlock at the first opportunity but he’s not going to stop you from doing that. “You can suck people out the airlock, poison all their food, put space heroin in the red food colouring of octopus cookies. You can do that and it’s entirely valid.”

Autelia hope have Human Orbit completed for Spring 2015 but that won’t mark the end of its development, it’s shipping with extensive mod tools. You’ll be able to add yourself into the game easily by taking the same personality test the crew are based on. You could also mod in whole new systems for the game: with a fishbowl filled with intelligent AI, think of the fun you could have with new items and alien viruses. You could make people lose their memory and forget their role on the ship or have a virus that makes people incredibly horny, a food that makes someone speak in an unknown language. The Steam Workshop’s mod collection’s going to look like an archive of the best of Star Trek.