The end of the world (zombies anyone?) is a commonly used setting in a lot of games these days, but makers of Planetary Annihilation, Uber Entertainment, have spun a twist on their newest RTS game. Human Resources puts you in the shoes of not one, but two apocalyptic forces in order to claim the remnants Earth for your own: giant insect-like robots and the mammoth creatures known as the Ancient Ones.

But none of this will happen unless the game is successful on Kickstarter, where they’re asking for smooth $1.4 million dollars.

Instead of defending humanity, you’ll be using them as your primary resource in your war efforts. They’ll help generate your huge armies, before being fed to your respective leader.

After being besieged by the newly-sentient machines who are “hell-bent on dismantling and recycling all of human civilization”, the humans were forced to invoke powerful tentacled monsters as a last ditch effort stem the onslaught. “Who knows what other factions may lurk in the void, waiting for the moment to strike?” eludes the Kickstarter page.

Up to eight players (or AI) can skirmish on procedurally generated maps. There are a lot random variables including human settlements and bonus items. It’ll use same engine as Planetary Annihilation, having a “clean colour and precise linework” visual style most notably used by comic illustrators. 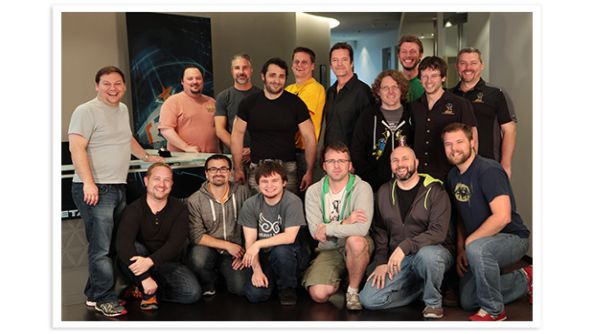 The team behind it has experience on RTS games such as Command and Conquer, Supreme Commander, Demigod and the recent Planetary Annihilation, which our Fraser gave a 6/10 in his review. The team need at least $1.4 million dollars from their Kickstarter to start production, and they have stretch goals in place teasing additional content like a new in-game faction. All things going well, they aim to have the game released by February 2016.

Will you be pledging?