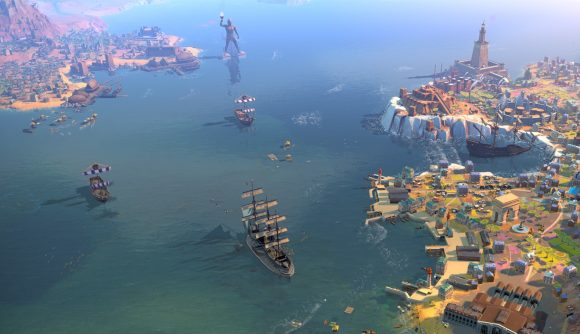 Epoch-spanning 4X game Humankind is now just two weeks from its release date, and developer Amplitude has said it’s made some key tweaks and additions in the time since the last closed beta. The studio says it’s added a new pollution system, improved diplomacy, and done a lot of cultural rebalancing as it prepares to send Humankind out into the wild – although players on Mac are going to have to wait another couple weeks.

Based largely on feedback collected during the Humankind closed beta, Amplitude has made some adjustments to game balance and pacing. Research costs and era star thresholds have been tweaked in order to pace the game out the way the studio intended, and many of the Humankind cultures have been rebalanced. Religion tenets now have “more conditional effects instead of always desirable blanket bonuses,” the studio says, which seems to suggest that religions will provide more of a gentle push toward certain styles of play by offering bonuses only under specific circumstances.

Amplitude has also fleshed out some of the explanatory text and tutorial systems meant to help players learn the game. Civics have better descriptions, and there are now some video tutorials available in-game.

Finally, the AI has gotten some improvements to the way it handles economies and army missions, and difficulty levels have been adjusted a bit.

Amplitude also announced that it was pushing back the launch of the Mac edition of Humankind. “This was a difficult decision for us, but we really wanted to take the time and make sure that the PC version was as good as possible,” the devs explain, “but also ensure that we had the necessary time to give the Mac version all the love the it is equally deserving of!”

The Humankind release date for PC is set for August 17.