I’ve had the privilege of playing Humankind four times now. The first press demo was almost a year ago, and was followed by the Lucy and then Victor OpenDev sessions. On this latest occasion, the game build includes the Industrial Era for the first time, and I’m very excited to try it out.

As I embark upon another journey through history, I notice that the Neolithic Era feels much better. There are far more ‘curiosities’ – Humankind’s collectible resource caches, equivalent to Civ VI’s tribal villages – to chase, which lends a greater sense of purpose and attainment to this phase of the game. The bounty of resources also means it’s easier to multiply my tribe, and I soon have a horde of little people wandering around.

Your tribe grows like this until you settle and found your first city, thereupon beginning the Ancient Era and the no-really-it’s-been-brilliant concept of civilisation. It’s possible to delay this, swarm all over the map, and overwhelm early rivals in a carpet of tribes – I rebuff the green AI as it tries to expand, boxing it into a peninsula – but presumably there will also come a point where it’s in your interest to settle before those rivals build a lead in technology that you can’t catch.

Questions to explore next time, I suppose. Until then, coming into the Ancient Era with more units means I have more things to do each turn, which is a good feeling. Having contained the green AI to my south, I send scouts east and north, and discover that my other rivals are far further away than in previous builds, with more unclaimed land between us. 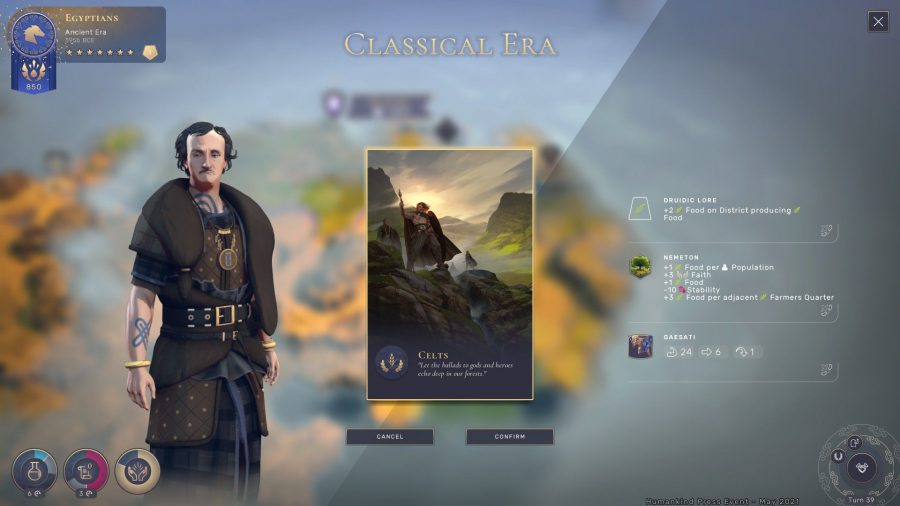 It’s important that it not stay unclaimed, of course. I pick the Celts in the Classical Era for their food bonuses, invest in generating influence, and claim all the land I see – then I claim territory on many of my once-distant neighbours’ borders. This irks them, but I maintain it’s still the best play: previous experience has shown that the AI has no hesitation in claiming territory on my borders, so the only way to avoid provoking them is to let them do so, which seems a willingly defeatist way to play. I figure I’d rather be the person holding the land and annoying everyone else. The late Classical/early Medieval clash with the AI, which has proven to be the most exciting phase of the game in previous builds, looms once again.

The only way to avoid provoking the AI is to let it claim territory, which seems a willingly defeatist way to play

For the more aggressive of my rivals, my refusal to hand over my territorial claims is enough to declare war, while others need to let the diplomatic grievances they’ve triggered stew for a little longer. Or need me to add new ones. Which I do. Anyway, I eventually wind up fighting everyone I’ve met.

I rush to churn out enough troops to cope, and must eke everything out of my existing forces in the meantime. This is where the brilliance of Humankind’s combat system shows itself again. I position my armies carefully, baiting the AI to attack while I’m camped on high ground or across rivers. I suffer losses, counterattack, secure peace with the purple AI long enough to redeploy troops to deal with the orange, then send them back when purple re-accrues enough war hunger to attack me again. It’s tense and challenging, and full of drama and difficult decisions, but eventually I prevail, hoovering up territory and vassalising two of my former rivals. 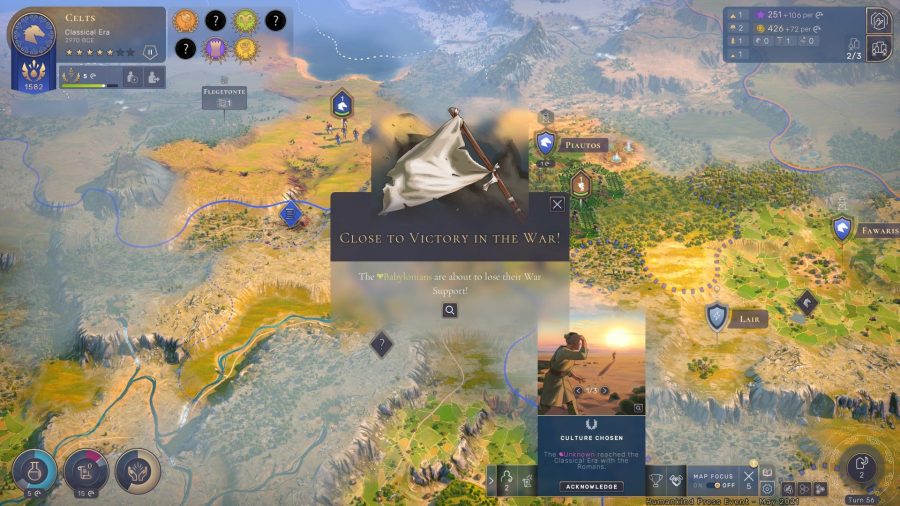 As the dust settles, my dominance seems assured, and so it proves. Once its wings are clipped, Humankind’s AI never recovers. Throughout the rest of the game my lead only widens, and none of the AI are ever able to seriously challenge me. Even unmet players who I’ve yet to fight aren’t able to keep pace as I leverage my conquests into growth. During the Early Modern and Industrial eras, I claim the entirety of the New World continent before anyone else has even learned how to cross oceans. Drowning in influence, I attach its entire territory to a single megacity.

Related: Check out the best strategy games on PC in 2021

This isn’t good, in case it needs saying. This pattern has repeated every time I’ve played Humankind, and it worries me more on each occasion. At the first press preview it was no big deal – just a question of balancing – but the devs say that a ton of balancing work has taken place since Victor, and here we are again. Given the ease of past experiences I set the AI difficulty to one higher than the default and it seems to have made little difference.

Lead designer William Dyce assures us that work to fix this issue is continuing “on two fronts: on the one hand we’re working on pacing and balancing to prevent empires’ economies, be they AI- or human-controlled, from snowballing too much. On the other hand we’re working on improving the AI so that it is better able to keep up, and also so that it is able to recognise when one empire has gotten too far ahead of the pack, and subsequently gang up on that empire.” 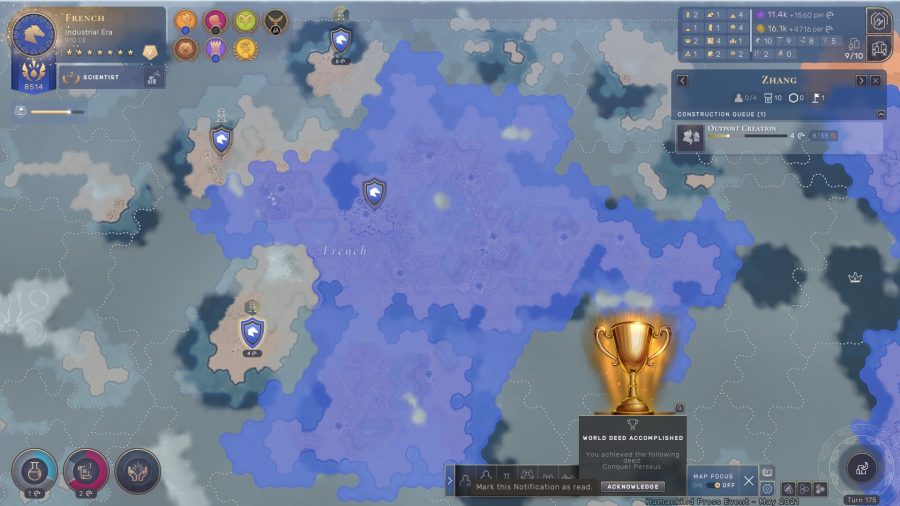 By the time I enter the Industrial Era, I’m not quite so excited any more. I pick France as my culture, because I’m lagging in science and would like to try all the industrial techs. I build their exhibition halls in every territory I own, and am glad to see the game start to push back against me a bit: you suffer a stability penalty for each district you build, and I generate rebel armies in a pair of already-unruly conquests I’ve taken off of the yellow AI.

They don’t do much of consequence before I chase them down and kill them, but solving the problem that created them isn’t wholly trivial. I’ve already purchased most stability-boosting buildings, not to mention the majority of Wonders (each of which also boosts stability) in the game. I can always spam Commons Quarter districts, but it’s an inelegant solution from a city planning perspective.

A better fix is found in social engineering. Ideologically moderate societies get a big stability bonus in Humankind, and I have a few civics points lying around, so I spend them on social policies that nudge a particular slider back towards the centre of its spectrum, and order is restored across my empire. 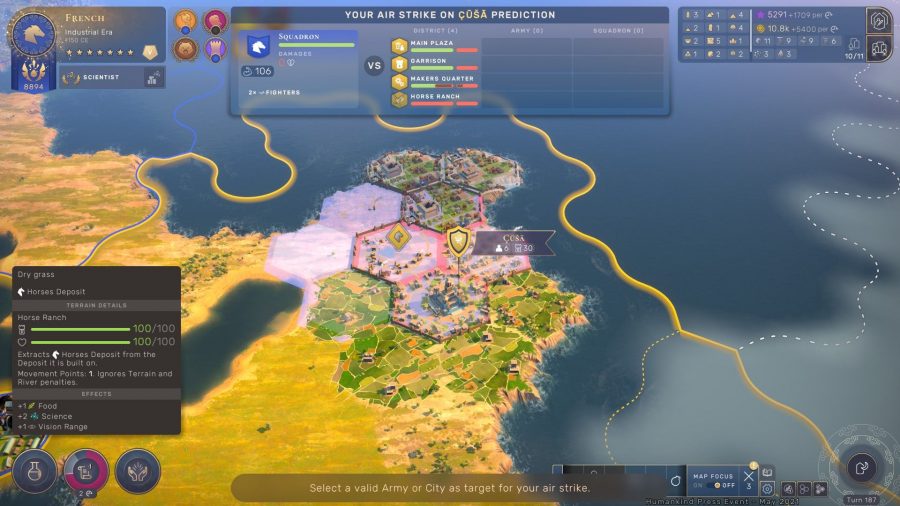 With France’s science boost I complete the tech tree, and declare an unnecessary war on the beleaguered yellows to take all this gear for a spin. A single unit of machine gunners slaughters something like a dozen Promachoi and three units of siege artillery are able to depopulate a city from the other side of a mountain range. Airstrikes are cool – planes are set to patrol by default but can be ordered to bomb targets of your choice within their range, to greater effect given more planes in the squadron. Importantly, they all act at once rather than flying out individually, as in Civ.

Back on the home front, I’m strangely reminded of fortifying an imaginary base with plastic army men on the floor of my childhood bedroom as I plonk defences strategically around my empire to protect it from threats which don’t exist. I place a train station in each territory, automatically generating railway tracks between them, and smile as I ferry armies across the continent in the span of just a turn or two.

It’s a tantalising glimpse of how radically the game could change in the Industrial Era if only I had someone of equal strength to fight. Scale is another consideration: army sizes are locked to four units in the Neolithic Era, but have swelled to nine by the Industrial. With Humankind’s brilliant combat system, it’s possible to see how a single battle can span a continent and persist for dozens of turns, as both players add reinforcing armies and manoeuvre ever more sophisticated war machines around the terrain, or rain death from a distance via artillery and aircraft. How brilliant that will be, and what an achievement that Amplitude has built a system that can deliver tactically rich battles that scale up from Ancient Era skirmishes to continent-spanning conflicts of the kind we saw in World War I.

Frustratingly, though, such spectacles are only theoretical for me right now, as the AI hasn’t yet been able to keep pace past the Medieval Era. And that’s Humankind in a nutshell: in theory, it has the systems to be the best 4X game – yes, better than Civ – but it needs to fix this snowballing problem or those systems won’t realise their exciting potential.