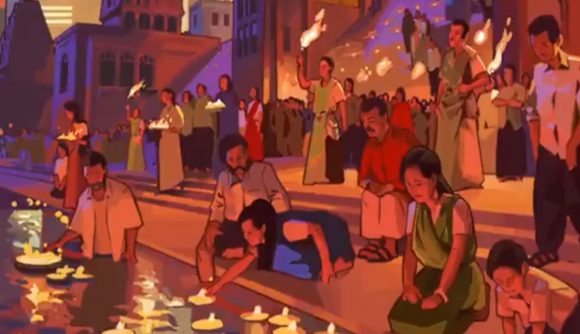 The Humankind release date draws ever closer, and the 4X game’s developer Amplitude Studios has revealed the sixth culture for its Contemporary Era. It’s the Indians, who join the Americans, the Australians, the Brazilians, the Chinese, and the Egyptians in the final time period in the Civilization-style strategy game.

Like their fellow Contemporary era culture the Egyptians, the Indians are aesthetes, meaning their focus is on influence building rather than building or expansion. The reveal artwork shows a gathering of people bearing torches, and placing lighted candles in floating vessels as part of a traditional Hindu Aarti ceremony. In the background can be seen the glittering skyscrapers of a modern metropolis.

As an aesthete culture, the Indians will rely on tourism and influence to convert territory and gain fame. Cultures earn era stars in different ways depending on their type, setting up changing sets of allies and rivals as one era gives over to the next. Generally, Humankind has two aesthete cultures per era, with the exception of the Classical and Medieval eras, which have one each – the Mauryans and the Franks, respectively.

Will you play as the Indians in the Contemporary Era? 🤔 pic.twitter.com/rvji6tMBUI

The Indians’ emblematic unit is Peacekeepers, while their emblematic district is the Ashram, which is a spiritual hermitage or retreat.

Humankind is due in August, but there are plenty more upcoming PC games coming out throughout this year.