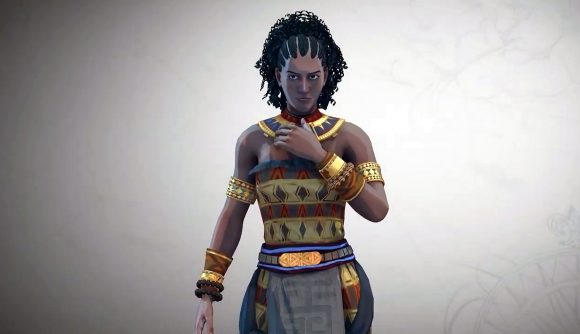 You’ll be able to create and customise your own player avatar in Humankind.

Reflecting the themes of the game, that avatar will evolve visually over the course of the game in line with “the way you play, the achievements you earn, and the way you develop your cultures and civilisations”, according to developer Amplitude. You’ll also be able to level them up via a “meta-progression system” to unlock custom looks and more, which you can then share with the world and show off in “multiplayer matches for up to eight players”.

There’s a preview of the feature at the end of a new gameplay trailer (see below), released today for The Game Awards 2019, that gives a quick sense of what your avatars may look and sound like. Taking a more whimsical tone than the announcement trailer – which was quirky in its own, caveman DJ way – the new video reflects on a single playthrough and a slight, centuries-long hiccup with “the neighbours.” That means there’s a look at some fighting, including the vaunted terrain-sensitive, army-unstacking combat system and even our first look at naval combat (submarines and tall ships confirmed, excitingly if unsurprisingly).

There’s also a look at a few Wonders, including St Basil’s Cathedral and Notre Dame. Take a look:

In case you missed the news at Gamescom, Humankind is Sega’s challenger to Civilization, perhaps the most famed and influential series in 4X strategy. Developed by the studio who brought us the cracking modern 4Xs Endless Space and Endless Legend, it, like Civ, enables you to play through human history as one of its greatest civilisations.

Unlike Civ, however, you’ll have the option to select a new civilisation with every era, assimilating its unique features into your old civ and creating a hybrid culture. You can use this to pursue a single game-long strategy, bolstering your original strengths with new synergies, or adapt to changing circumstances in the game. With over 60 civs to choose from, the number of possible unique hybrids exceeds one million.

What kind of leader you’d have for such a game has been an open question ever since the announcement – are they historical leaders, like Civ? Do they change from era to era? – and now we know.

Humankind is due for release some time in 2020.