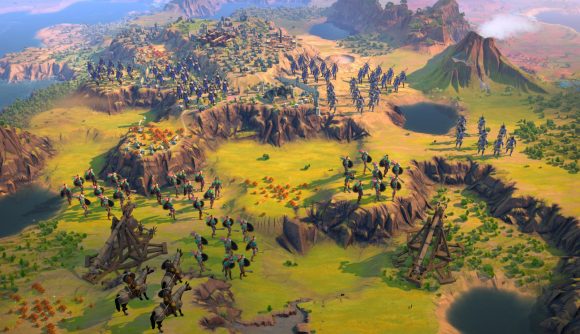 Humankind players have been looking forward to the new 4X game’s next major patch, and now they finally have a date to pencil into their calendars. Developer Amplitude Studios says the update is scheduled to arrive October 28, and has provided a rough idea of what we can expect when it lands.

Amplitude isn’t ready yet to get into details about what’s in the next patch, but the studio calls it the “next big update” in the latest Humankind blog post on the official Games2Gether site. What the devs will say, however, is that it’ll include some new options for dialling in resource abundance and end conditions when you’re setting up a new game. The idea here, the studio says, is to “try to address the rapid increase in the game’s pace in the mid to late game”.

The update will also address “some of the most discussed concerns about balance between cultures, among other things”, the developers say, adding that they’ll be sharing more specific details about the patch sometime next week.

The next patch isn’t the only thing the studio is working on, however. Amplitude says it’s busy with “various improvements we think you will be excited about,” but again aren’t quite ready to discuss in detail just yet.

The devs say they’ve been keeping a weather eye on community discussions and feedback, and that they’re prioritising improvements to multiplayer stability, the release of the Mac version of Humankind, and some remaining crashes and stuck turn issues.

We’ll find out more about what’s in the near future next week.