Terrain is a key component in many historical strategy games, and it looks like Amplitude Studios’ upcoming 4X title Humankind will be no exception. The developer has unveiled the second video in its fortnightly ‘Feature Focus’ series exploring different aspects of the game, which this time takes a good look at terrain – and it’s not just pretty, it’s a “pillar of Humankind’s gameplay.”

That’s according to the developer in a press release revealing the new video, which is titled ‘Reimagining Terrain’ (and included further down this story). Packed with footage of Humankind’s landscapes – which are beautiful even in their pre-alpha state – the video gives us an idea of how varied and fundamental terrain will be in gameplay. “The player will be able to explore the world, create cities, develop battle strategies and tactics”, Mathias Gregoir, technical art director, explains.

“Our objective is to have something that is not necessarily realistic, but that is plausible enough while being stylized and coherent to also have vegetation, various types of terrain, mountains, and a world that makes sense.”

Timothée Raulin, lead 3D programmer, expands on this, explaining: “To make the world believable we feel that it was very important for us to give the player a strong shape of the world with flatlands, hilly countrysides, and mountain ranges that are clearly distinct.” These kind of options, Aurélien Rantet follows up, will help “inform the player’s strategy.”

The type of surrounding tiles will have a significant impact on what you can do – for example, your unit might be able to tackle a gentle slope, but a steep cliff might mean they need to turn around and come up with a new plan. “This is a way to create challenges and opportunities for exploration and even battle”, Rantet reveals. 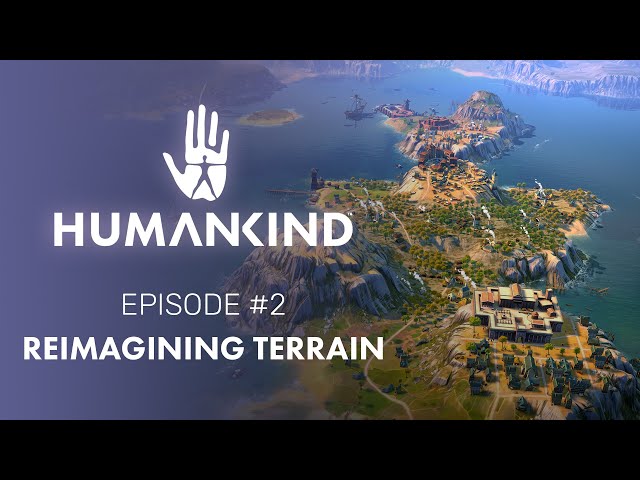 You can see this in action in the video. At around the 1:28 mark there’s a patch of terrain that appears to force opposing units into a scrimmage, with mountains in the north blocking a route away in that direction, and coastline limiting escape options to the east. Spear-carrying soldiers get locked into a fight by the surrounding tiles, as archers from the south rain arrows at them, protected by the coastal bay sitting between them and the action.

Other examples of how terrain will play a part in Humankind include having your line of sight blocked when exploring valleys (you’ll need to “scout from higher ground”), elevations providing battle advantages, and “temperature and humidity variations” determining what vegetation – and so, what kind of obstacles and resources – grow in each biome.

Best of all, find an important piece of land or a distinct natural landmark first, and you’ll be famous. Nice.

There’s no set Humankind release date to mark on your calendar just yet, but it’s due to arrive sometime in 2020.