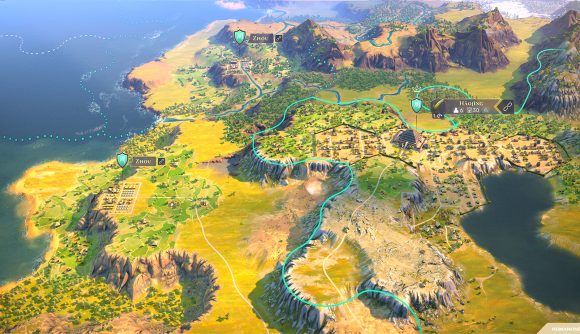 Upcoming 4X game Humankind wants to challenge Civilization for its throne. Because of this, the two strategy games possess many similarities, even down to their potential for mad tile yields. You may remember earlier this year we briefly saw some disgusting Civ 6 tile yields, and now someone on the Humankind subreddit has shared some mad numbers of their own from the current open beta.

The thread focuses on Frame_Routine’s Angkor Wat, a wonder you can build in the game, which is showing some decent yields across the board, but with food specifically at nearly a hundred per turn. Commenters have noted that if you combine this with other wonders such as Stonehenge and Machu Picchu, that number can easily climb over 100. Another user alleges they were getting 858 food from the Angkor Wat alone, thanks to various combos which included St Basil's cathedral.

Yields in Humankind don't seem as straightforward in Humankind as they are in Civilization, as there are key differences across city output, city ‘extensions’, and then city ‘exploitations’, as well as how you take advantage of luxury and strategic resources. An old thread from last year attempting to explain Humankind’s yield systems highlights the complexity, although much of this may still change before launch.

Still, it’s good to know that we’ll have to put up with disgusting combos in Humankind as well, and we’re looking forward to seeing what the wider playerbase can do when the game releases next month.

Figured this sub could use some classic yields. Angkor Wat from the open beta from HumankindTheGame

In the meantime, you can read our thoughts from the most recent OpenDev beta. You might also be pleased to know that it won’t be using Denuvo for its anti-piracy solution any more, and for those that are curious, all 60 cultures have also been revealed.