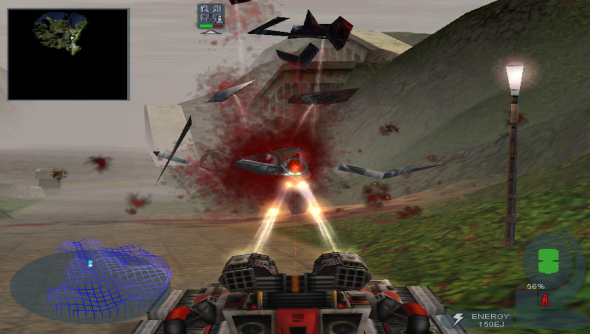 Don’t be swayed by the discount prices offered across digital storefronts this weekend, the shops are teaming up in a concerted effort to empty your wallet. It’s all a ploy by the government to kickstart the economy. Sure, folk say we’re escaping from recession but it’s all propaganda. Bob from the pub told me.

So on no account should you go to Humble Bundle and GOG to buy all their temptingly cheap games.

Definitely don’t buy Hostile Waters, one of the greatest games to grace the PC, for $1.79.

This week’s Humble Weekly Bundle’s packed with great games, as per usual. Jamestown alone is worth laying down dollar for. The colonial era shmup sees you battling aliens on Mars while dodging walls of bullets. It’s great fun to play with three others on a big screen, too.

Along with Jamestown you also get Closure (the game, not therapeutic catharsis), S.P.A.Z, and Shatter. I’ve heard great things about Shatter and Closure managed to receive a lot of coverage when it was released. The real boon comes at $6. Spend above that paltry sum and you also get Dungeon Defenders and Defense Grid Gold. Defense Grid is simply one of the best tower defense games. If you want the finest example of the genre with no mechanical thrills (like Sanctum’s first-person slant or Anomaly’s reversal of player and AI) then Defense Grid is the way to go.

Separate to Humble Bundle, GOG has a Black Friday sale. It sees 70% off on 65 of the distributor’s games and there are some real gems in amongst the sales. In particular, Starbreeze’s Chronicles of Riddick: Assault on Dark Athena, Commandos 2, and, of course, Hostile Waters.

Assault on Dark Athena was Starbreeze working at the best of their abilities. They made an FPS where you felt both empowered and vulnerable from level to level, which is quite the achievement. Largely this is managed through weapons that feel like they pack punch. Once you actually get hold of a shotgun it reveals itself to be a handheld cannon, one that can take out an enemy in a single hit to the upper torso. That rule goes both ways, though. Riddick was at its best when you were playing cat and mouse with the AI.

Commandos 2 was an excellent example of isometric tactical gaming. It bordered on a puzzle game at times because at the start of each mission you were presented with the whole level without any fog of war. This allowed you to plan how you would infiltrate the facility before you, using the abilities of your differently skilled commandos to crack the puzzle that was a WW2 submarine base or a Burmese jungle outpost. I’ve not played anything similar that’s bettered it.

I’ve a special place in my heart for Hostile Waters. The game begins with the Antaeus, a supercarrier that was sunk to the bottom of the ocean following the last great war, resurfacing for one last mission. You must investigate a strange island chain that’s controlled by a cabal of nasty types that have it in for the now peaceful world. You use the carrier as a mobile weapons factory from which to assault the cabal’s islands. You can build helicopters, tanks, hovercraft, and planes which you can either stick an AI chip into and have them control themselves or jump into the cockpit yourself. It makes the game half RTS, half action game. It’s just fantastically good. If you’ve never played it then, please, pick it up in this sale.

You can see all the games on offer here.