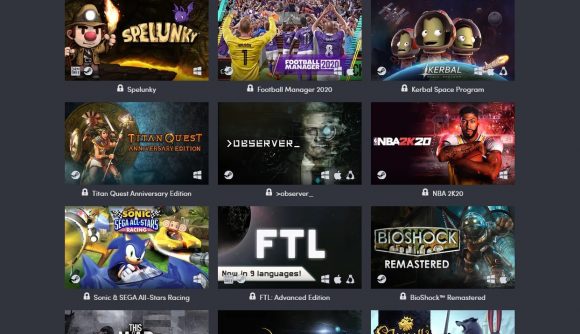 Game developers and publishers are pitching in to help support the cause of racial justice worldwide following widespread protests in the United States over the brutal treatment of black people by police. Itch.io just wrapped up its massive bundle offer after raising more than $8 million in support of Black Lives Matter organisations, and now Humble has a major bundle on offer: it’s more than $1,200 worth of games and other media, and proceeds benefit the NAACP Legal Defense Fund, Race Forward, and The Bail Project.

For $30 USD / £25, you get a large and eclectic bundle that includes not only some hot indies and triple-A titles, but also a healthy serving of literature, graphic novels, and audiobooks from black authors. Games in the Humble Fight for Racial Justice Bundle include NBA 2K20, Kerbal Space Program, Spelunky, Elite Dangerous, Football Manager 2020, Sonic Sega All-Stars Racing, and many others.

That list alone would more than justify the minimum donation level, but this bundle also throws in digital copies of a few graphic novels, including Shaft: A Complicated Man by David F. Walker, the Attack on Titan Anthology, and Ronald Wimberly’s Prince of Cats and Black History in Its Own Words.

There are a selection of relevant books, too – both in the fiction and non-fiction categories. The bundle includes Twelve Years a Slave by Solomon Northup, Nalo Hopkinson’s Falling In Love With Hominids, Resist!: Tales From a Future Worth Fighting Against, and Edgar Villanueva’s Decolonizing Wealth in both e-book and audiobook formats.

It’s a fabulous bundle under any circumstances, and it’s another opportunity to help support organisations doing important work for the cause of racial justice.

We’ve put together a list of additional resources that can help you understand or explain the importance of Black Lives Matter in our present historical moment.