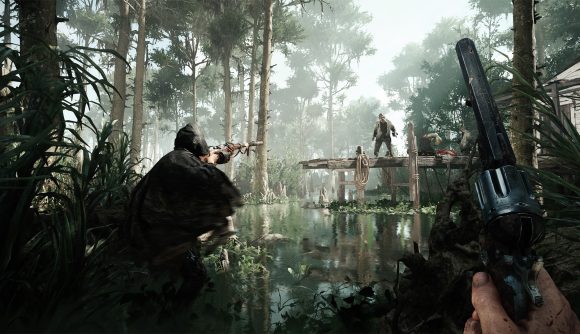 High-stress FPS game Hunt: Showdown has a new patch out today that makes some key changes and updates, including the newly added ability to retrieve arrows and throwing knives from enemies they’ve landed in. There’s a new revolver, as well as some new rules for skill-based matchmaking, plus a bunch of balance changes to several of Hunt: Showdown’s weapons.

Hunters will be keen to learn about the new Scottfield Model 3 revolver, which will go in your small slot and takes medium ammo. It holds six rounds in the open cylinder, and features a break-open action for faster reloading. The cylinder also has a built-in ejector that spits out all the shells and casings at once – so you can fill it right back up again that much quicker. It’s available at rank one and can be purchased for 77 Hunt dollars.

There’s a new piece of gear called the regeneration shot as well, which comes in both weak and standard variants. The weak regeneration shot lasts for five minutes, while the standard version lasts for 10. During that time, your normal health regen speed is cut in half (down to 2.5 HP per second), but it won’t stop once it fills up a single ‘chunk’ of health, and it begins as soon as you’ve been hit. That healing process will pause if you’re hit with a status effect like poison or bleeding, and while you’re reviving someone with necromancy.

One of the more impactful changes in update 1.6.2 is how it’s made kill assists easier to earn. The window of time you have to qualify for a kill assist is now calculated based on how close you are to the target. If you stay close to a target after hitting it, you’ll have more time in which to qualify for an assist – and that’ll count if your target is killed by an AI monster or if they have some kind of terrible accident and end up killing themselves.

The patch also makes a rather amusing change to ‘retrievable projectiles,’ including throwing axes, throwing knives, basic crossbow bolts, and hunting bow arrows. These can be pulled out of whatever or whoever they’ve landed in, and yanking them out now causes additional damage. This probably won’t be a major factor in PvP, but against the walking dead and corrupted wildlife of Hunt: Showdown, it could come in very handy indeed.

Another significant change in this patch is that skill-based matchmaking can now only be disabled once you reach level 100. Crytek says it wants to make sure new players aren’t running up against highly seasoned veterans, at least until they have some experience under their belts.

There’s plenty more in the full patch notes, which are available over on Steam.