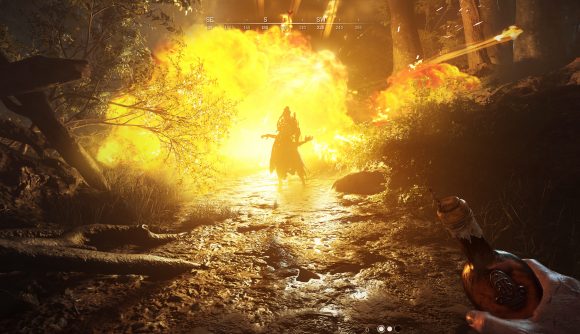 The scariest thing about Hunt: Showdown isn’t the moaning zombies or even the massive tarantula – other players are always the biggest threat to your success in Crytek’s bounty hunting survival shooter. For those nervous about getting in, there’s good news: the latest major patch has added a new mode that drops the PvPvE action down to regular old PvE.

Trials mode, added in update 1.4.1, is about familiarising yourself with Hunt’s maps, weapons, enemies, and movement without the added pressure of potentially being murdered at any moment by someone sneakier and more familiar with the lay of the land. Trials lets you choose between free-form exploration and more directed activities, which have a progression and unlock system attached.

Each of Hunt’s three maps has a series of trials, and all of these have easy, medium, and hard thresholds for completion. You’ll earn a star for each of those you complete, and those stars can then be used to unlock legendary hunter gear. These are typically straightforward tasks like getting 20 headshots on zombies, or navigating a parkour course, or killing a certain number of NPC enemies in an allotted time.

Ultimately, it’s a lower-pressure way to get a sense of what’s going on in Hunt: Showdown and to become familiar with how its weapons feel to use. Being that it’s a ‘Weird West’ setting, you’re not using high tech ACOG or holographic sights – dusty sniper scopes are as advanced as it gets, and generally you’re working with plain old ironsights. That means it’s helpful to get as much marksmanship practice in as possible, and Trials allows you to do that without worrying about losing your bounty hunter or their equipment in a full-fledged hunt.

Instead, you’ll be playing as ‘notorious Hunters from the past’, the game says, and each trial has a bit of flavour text explaining something about the hunter you’re briefly playing. You’ll head into each trial with a particular hunter and a locked gear set, too – so don’t count on bringing in any of the fancy stuff you’ve picked up so far.

Speaking of gear, though, today is the beginning of the Hunt: Showdown Twitch drops campaign. You can tune in to several Hunt streamers now through July 6 to earn free gear just by watching. Don’t worry if you get doubles: update 1.4.1 also adds dual wielding for pistols.