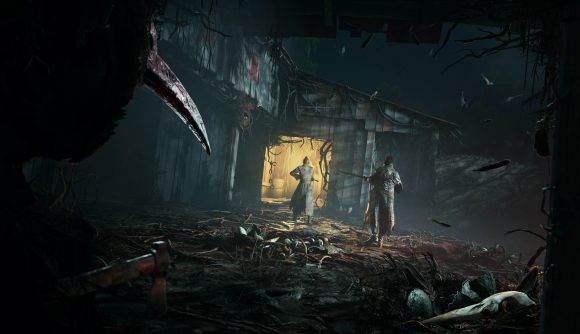 Hunt: Showdown developer Crytek has announced that the planned update for this year has been delayed into next. On the upside, new content is still set to arrive for the horror game before the end of the year.

In a news update on the official site, Crytek broke the news that update 1.5, planned to bring in a new boss and custom ammo types, won’t be arriving until 2021. “Friends, 2020 has not been kind, and we are sorry to say that we have had to move these two features to 2021,” the post reads. “We know that you won’t be happy to hear it, we aren’t happy about the delay, but we are dedicated to making you the best possible game with the best possible features, and these two will release early next year.”

The studio did share a few images teasing what’s to come, two including some guns, one showing a hint of the new monster about to get the drop on a pair of hunters, viewable above, and another spooky looking clock. As a consolation prize, new weapon variants, Legendaries, watch towers, and a new type of loot are all coming before 2020 concludes, in update 1.4.8. A dev livestream on the official Twitch will show these off in more detail at a time TBA.

Hunt: Showdown has added a number of substantial updates since crawling out of Early Access back in February. In June, a single-player mode was added, and in August testing started for a spectate feature.

We’ve the best survival games, and best zombie games, to keep you suitably on edge for when that meatier update comes to Hunt: Showdown in 2021.