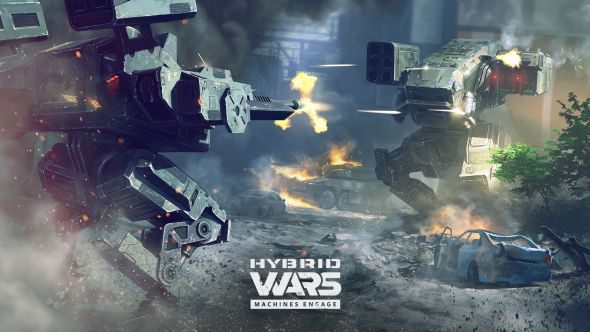 WG Labs, which brought about the updated version of Masters of Orion, has shown off its second project. Hybrid Wars is a top-down shooter set in the near future of 2060 where everything, as it does, has gone horribly wrong. Corporations rule the world, AI robots are equipped with really big guns and you’re a mercenary.

For more announcements in this, the week of PC games news, check our home page.

No gameplay footage yet, sadly, or even screenshots, but it is due to come out this year. You pick from one of three playable characters in big open-world warzones. You’re fighting against the various sorts of robots with “power bombers, assault mechs, tanks, boats, and attack helicopters” apparently, customisable in a bunch of different ways. There’s also various modes, including story and survival.

It’s made by a company called Extreme Developers, which is certainly laying your cards on the table early, and WG Labs shacked up with them because it fit their remit – small, passionate teams doing things a little experimental. “Extreme Developers submitted their title, and its mechanics, combined with a nostalgia for ‘90s console shooters, had us interested,” says Andrei Gruntov, global publishing producer, “so we decided to publish the game. Hybrid Wars is a small, experimental game, which is easy to pick up and have fun with.”

It’ll hit Windows, OSX and Linux at some point in 2016, with a Steam and GOG page already up.