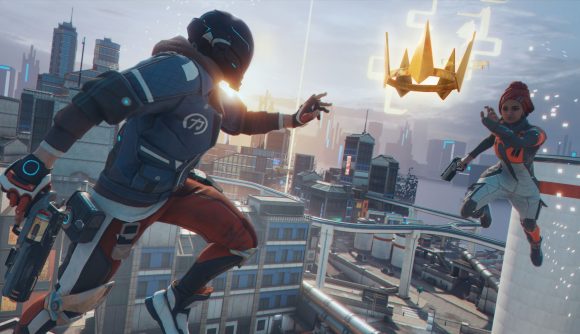 As with others in the genre, Hyper Scape matches begin with 100 players, each of which are initially under-equipped. You’ll scavenge weapons and abilities named hacks. These allow you to, for example, bounce high up into the air and across large distances, quickly create walls in front of you, hurt your opponents with mines, and more, and you can have two equipped at any one time.

You can also combine hacks or weapons by a process named fusion. If you find a hack or weapon you already have equipped, you can fuse them together to create a stronger version of that hack or weapon – for example, you can increase the damage dealt or reduce cooldown time. You can do this multiple times to keep improving your guns and abilities.

Crown rush is the primary mode, and it will be played in teams. Developer Ubisoft Montreal says it wants players to still have an active role in the game even after they’re eliminated – you can spot enemies for your teammates, who can also revive you using restore points, which are dropped when an enemy player is defeated.

As with others in the genre, the map will reduce in size over time through a process called decay, in which parts of the play area will disappear entirely. Other events, such as an infinite ammo phase or low gravity phase, will keep things fresh along the way. This is where the game’s Twitch integration comes in: viewers can influence which events happen next.

If you make it to the final stages of a match, a phase named showdown will be triggered. Here, a crown will drop somewhere on the match, and if one team keeps hold of it for 45 seconds, that team will win the match. Of course, the player holding the crown will be visible to all other players, meaning it won’t be easy to keep hold of it for too long. Killing all the other teams is another route to victory, of course.

Another limited-time mode, dark haze solo, foregoes teams and plants you in a low-visibility map containing different weapons. It remains to be seen which other modes will be revealed and how long they will remain active for when the game is released.

Hyper Scape will launch with a Fortnite-style battle pass, though Ubisoft is yet to reveal much more on this, and a store where you can purchase cosmetic upgrades for your characters.

Hyper Scape will go into a closed technical test phase on PC today, with a full launch coming further down the line. It will also come to PS4 and Xbox One at some point in the future. Until then, why not check out our current lists of the best battle royale games or the best FPS games. Nice.