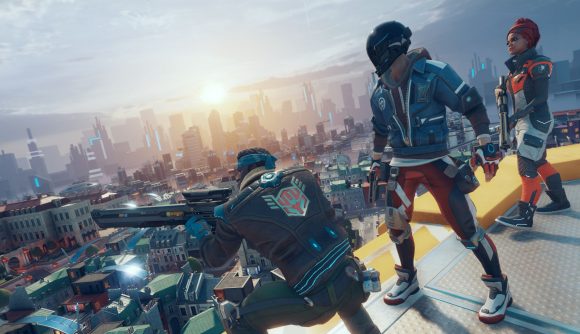 The free-to-play game was revealed just recently and went into a closed technical test phase shortly afterward. At today’s Ubisoft Forward presentation, however, the company revealed the game will go into open beta immediately.

Four modes will be included in the open beta: squad and solo versions of the signature crown rush game mode, hack runner, and turbo mode. All players will receive the first 30 levels of the battle pass for free, and the in-game shop will be enabled. Ubisoft has not yet confirmed when the open beta period will close and the game will fully launch, nor when it will come to PlayStation 4 and Xbox One.

As with others in the genre, Hyper Scape matches begin with 100 players, each of whom are initially under-equipped. You’ll scavenge weapons and abilities named hacks. These allow you to, for example, bounce high up into the air and across large distances, quickly create walls in front of you, hurt your opponents with mines, and more, and you can have two equipped at any one time.

You can also combine hacks or weapons by a process named fusion. If you find a hack or weapon you already have equipped, you can fuse them together to create a stronger version of that hack or weapon – for example, you can increase the damage dealt or reduce cooldown time. You can do this multiple times to keep improving your guns and abilities.