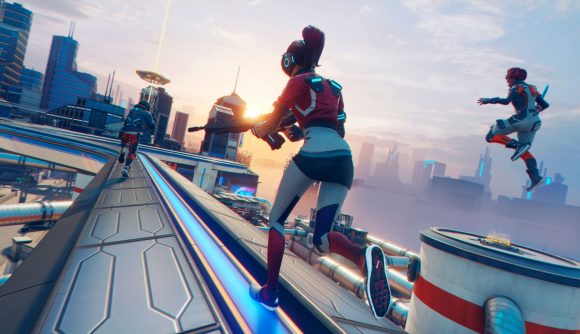 Ubisoft has announced that it is ending development on its free-to-play battle royale game, Hyper Scape. The company says it will shut down Hyper Scape servers April 28, just a few weeks shy of the two-year anniversary of its open beta.

“We have made the difficult decision to end development of Hyper Scape and shut the game down as of April 28th,” the Hyper Scape team says in a brief statement posted to the Ubisoft website today. “We set out to create a vertical, close-quarters, and fast-paced shooter experience and we are extremely grateful to our community for joining us on our journey.”

Ubisoft adds that lessons learned from Hyper Scape’s development and period of live service will be used to inform future projects, and extends its thanks to the community of players. “Thank you for your passion and dedication to the world of Neo Arcadia both inside and outside of the game,” Ubisoft says. “Your devotion to the game we built will always be cherished.”

Hyper Scape made a concerted push for early dominance on Twitch, peaking at more than 450,000 viewers in the first hours of its open beta. But that initial interest waned, and it seems players either moved on or returned to the battle royale games with which they were already more familiar.

The team encourages players to reach out to them with any questions.