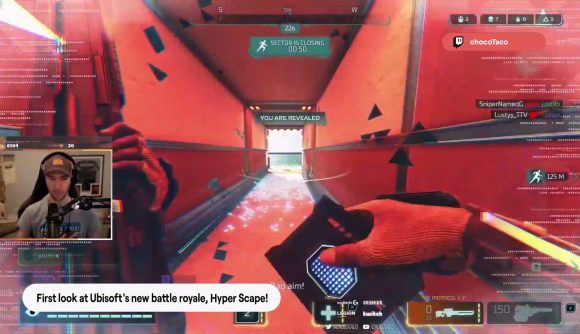 Hyper Scape, Ubisoft’s futuristic, urban battle royale that leaked days ago, is indeed real, and you can join in the technical test by watching Twitch streamers who have been granted early access. The game was announced today, along with the Twitch drops campaign.

Readers may recall that Riot used a similar system for promoting Valorant ahead of launch: players could earn access to the beta by watching a few hours of Valorant streams on Twitch. According to rumours, Hyper Scape is purporting to integrate Twitch “with never [before] seen levels of integration from a big game,” according to esports consultant Rod Breslau.

Streamers went live with Hyper Scape two full hours before Ubisoft’s own feed was set to broadcast the official announcement of the game, which is certainly an interesting way to schedule a game reveal. In any case, you’ll be able to watch the unveiling over at Ubisoft’s Twitch channel at 19:00 BST / 14:00 EDT / 11:00 PST. In the meantime though, there are tonnes of streamers who are already playing the game, and watching their feeds could land you an invite into the technical test.

At the top of the list is Twitch’s own Twitch Gaming channel, which features several streamers having a first crack at Hyper Scape. Make sure your Ubisoft and Twitch accounts are linked in order to take advantage of the drops, though.

We’ll have more details for you about Hyper Scape before long – just stay tuned.

In the meantime, have a look at our list of the best battle royale games… so far.