I’ve been craving a new multiplayer survival game to help me get through lockdown. I don’t like to think how many hours I’ve spent preparing meals, gathering resources, and grinding through daily life while trying to stay safe – let alone all the survival games I played. I’ve clocked 120 hours in Valheim, torn through the spider-infested mines of Deep Rock Galactic, and cursed at the gruelling, oppressive challenge of Don’t Starve Together. All great, sometimes harrowing experiences, and now Icarus – the latest survival game from DayZ creator Dean Hall – is just around the corner.

Described as a session-based PvE survival game, Icarus’s premise is that humanity has failed to terraform the titular planet, rendering it uninhabitable by creating a climate in which weather changes are sudden and hostile. Prospectors must now hang in orbit, making trips down to the planet for resources and supplies.

This is where the ‘session’ part of Icarus comes in. Every time your crew drops down to Icarus you’re on the clock, and if you don’t make it back to the ship then your character is lost forever, which means you lose all the stuff from your session. It sounds stressful, especially coming from Valheim, in which I can happily spend well over a week constructing a grand hall and making lox meat pie (don’t judge me). But sessions in Icarus can last weeks, days, or hours, so it’s not necessarily a breakneck sprint as soon as your feet touch terra firma.

Dean Hall is on hand to guide me through the preview build, which is handy as I’m generally the mace-wielding bouncer when I play co-op survival games, not the strategist. Landing on Icarus in our tiny drop pod makes for an unexpectedly cinematic introduction, as a sonic boom reverberates around the planet, which I’m told sounds even cooler underwater. You emerge from the pod into a tranquil, Edenic forest; the wind whistles softly through the trees as deer hurry between the boughs and foliage. There are steep, snowy mountains in the distance that rise and fall in succession towards the setting sun. It’s very peaceful – for now, at least. 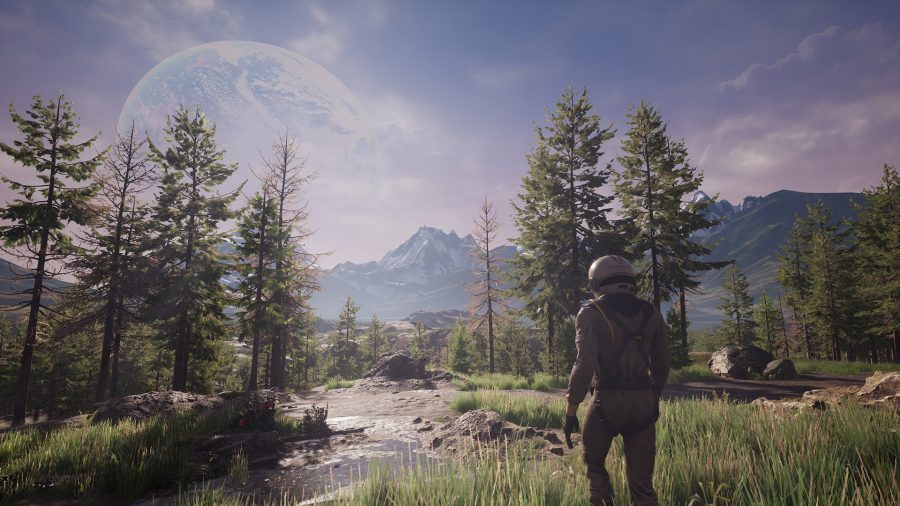 It’s not immediately obvious what you’re supposed to do next. Key resources are highlighted, but you still have to search among the foliage to find what you need and craft basic tools like a pickaxe. You need sticks, stones, and berries – where would survival fiction be without random berries – to get started, and all three are abundant near our landing spot. More survival gaming staples can be glimpsed at the bottom of your HUD, where you’ll see oxygen, water, and food meters. It’s fairly easy to keep these topped up, but they deplete quickly, requiring close monitoring to make sure you don’t eventually keel over.

We wanted to make it feel like Skyrim, where you had real agency when choosing to enhance your character

Succumbing to exposure isn’t too bad as things go; if your oxygen runs low or you’re hurt by an animal then a teammate can revive you and haul you back up. But that’s not to say Icarus can’t be tough. If the drop pod leaves without your character on board then you’ll lose that prospector and all of their gear forever – some fates are indeed worse than death. If that wasn’t harsh enough, there’s also no minimap to help you relocate each other if you become separated, stray too far from the ship, or one of you gets lost. Those Don’t Starve nightmares flood back.

All of this is designed to make you think about the risks at every stage of an expedition. “Do you fly too close to the sun?” Hall asks. “Icarus is all about knowing what the risks are and making that assessment.” Just as I think Hall has finished dropping difficulty truth bombs, the wind starts to pick up and I hear genuine panic in his voice. 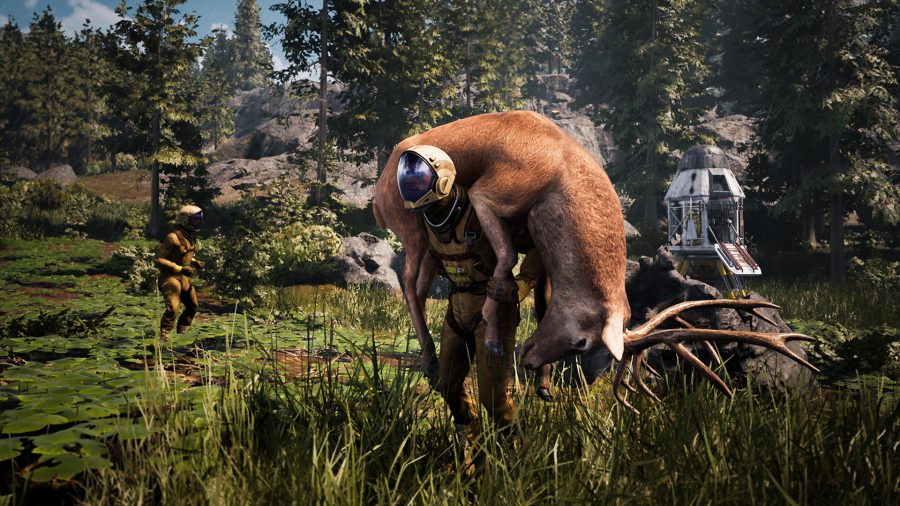 The planet itself is the main antagonist in Icarus, and vicious, sporadic storms threaten both your buildings and your life. Hall quickly whips up a wooden shack for us to weather the storm, and once inside we keep alert to replace any planks that the violent wind might damage. There are a few different building tiers and materials that’ll help you withstand Icarus’s various weather effects, but for your first drop you’re probably going to be hunkering down in a hermit’s hovel.

The building mechanics are a little fiddly, and on more than a few occasions I accidentally plonk a beam down a few yards away from its intended destination. Judging from what Hall manages to cobble together though, this is a robust building system that simply takes practice to get used to. Fortunately, if like me you’re not into building, there’s an extensive talent tree that lets you upgrade your character with a variety of specialisations ranging from combat to farming. “A big part of your character progression is unlocking talent points,” Hall explains. “We wanted to make it feel like Skyrim, where you had some real agency when it came to how you were choosing to enhance your character.”

Skyrim isn’t the only inspiration. “I really liked Ark,” Hall says, “but as much as when you really like a game you also come to see a lot of the problems with it. There was definitely something that I really enjoyed when it came out. I enjoyed that loop of going in and building stuff, and especially doing it alongside your friends… Valheim wrapped a really neat bow around that concept of going in as a team.” 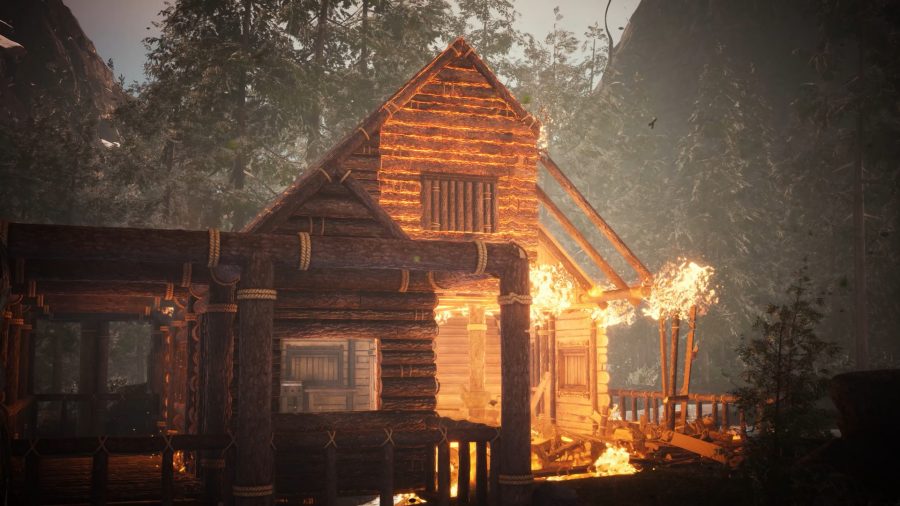 Although Icarus is PvE, Hall comes from a PvP background with DayZ, and very familiar with the strengths of this form of play. “Pacing is something that PvP survival games like PUBG, and then of course Fortnite, really deliver. And we really want to explore that too,” Hall says.

Although building fans may be disappointed to learn that your structures don’t remain on the planet once you leave, they’re still necessary. “If I think about Valheim, we’d always build with purpose,” Hall says. “Maybe we needed something in the plains, or we were building a little house that we can recover in beside Bonemass. We wanted to be able to give you reasons to build in Icarus, but we also want most things to have a finite time, because it’s a good way of pushing you to build new stuff and solve new problems.”

There’s a lot to absorb in Icarus, but as the demo draws to an end Hall helpfully reminds me that co-op survival games are as much about enjoying the sheer chaos that unfolds when you start ignoring your objective as they are about eking out an existence in a hostile world. We set about lighting the forest on fire so we can watch it swallow up our makeshift base. At some point a wolf attacks me, knocking me to the ground just in time to watch another storm sweep through, mercilessly levelling our little settlement. Icarus looks like it’s going to be a challenge, but one I look forward to fumbling my way through.