Want to unlock the Bow of Odysseus in Immortals Fenyx Rising? You’ll need the bow to start firing arrows, a key mechanic for both puzzle solving and combat. Getting through the challenge room to unlock the bow may not seem too difficult, but there’s one particular ability the game doesn’t tell you about that can make this frustrating. We’ve broken down every aspect of the puzzle to ensure you’re able to breeze right through this area.

You need to tackle a number of smaller puzzles before making your way through the Vault of Tartaros. This will require the Bracers of Herakles to lift heavy objects, but don’t worry if you haven’t managed to find them just yet, we’ll walk you through the whole process. There’s also a chest on the way to the Bow of Odysseus which should give you enough resources to upgrade your equipment.

If you haven’t done so already, take a look at our Broken Wings guide if you don’t have the ability to double jump – without Broken Wings you’re unable to access the Bow of Odysseus. With all of that out of the way, let’s go through all the steps needed to unlock this important item.

After acquiring Broken Wings, you need to head towards the location marked on your compass. Here you’ll find a character screaming in the distance for help. There are some enemies on the way, but you should be able to take them out with ease. Once you reach the highlighted destination, you’ll spot a Gorgon blocking your path. Slaying this beast will reward you with Bracers of Herakles, giving you the ability to lift large boulders, boxes, and crates. 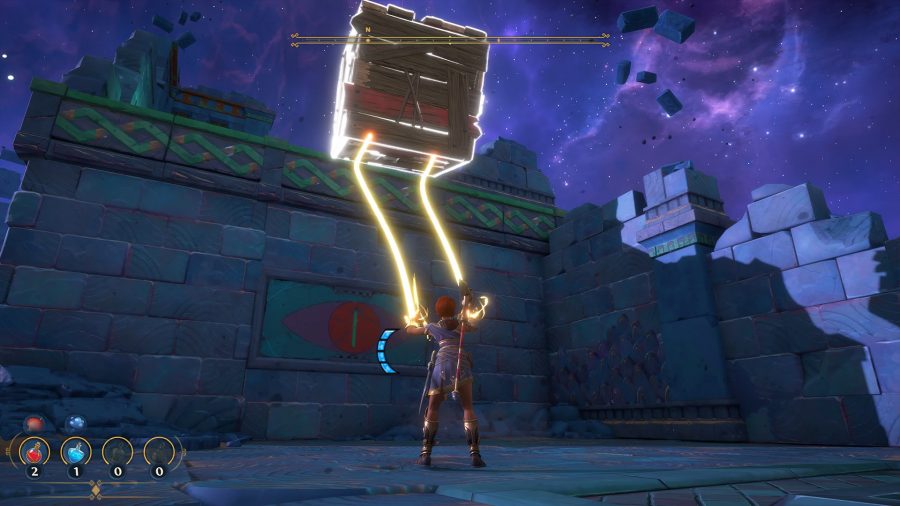 Once you’ve collected these items, drop down from the turtle’s head and you should arrive at the next puzzle. Using your new bracers, pick up the metal boxes and place them on the pressure pads. Doing this will unlock the gate, allowing you to access the rift to the Vault of Tartaros.

In this puzzle room, you’ll learn the basics of the Bracers of Herakles. The first puzzle will require you to lock on to a distant item, using the bracers as a long-distance magnet. The second puzzle also requires the magnet ability, except this time you need to bring the box down to your platform in order to jump to the next area.

The third puzzle teaches you how to use the charged throw ability. As you hold a metal box above your head, pressing down the throw button will show you the object’s trajectory. Throw each of the metal boxes to their corresponding pressure pads – this unlocks new platforms leading to the Bow of Odysseus. 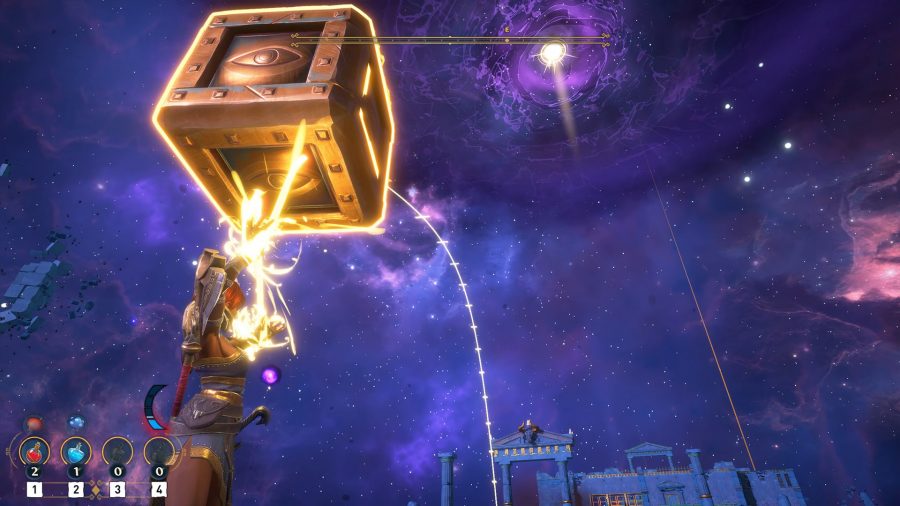 You now have access to a new set of puzzles that teach you how to shoot arrows. The first task has you hitting yellow targets to raise platforms. The second task is essentially the same thing, but with the added challenge of firing arrows from further away. Hitting the first two yellow targets should be simple enough, but the third target cannot be hit using the same technique. Head over to the controls and find the button combination that allows you to fire Apollo’s Arrows. Apollo’s Arrows give you the ability to move the arrow mid-flight, allowing you to hit the target located behind the wall.

The final Bow of Odysseus puzzle requires you to break a chain using your arrows, dropping a large rock from the air which splits into two smaller rocks. Place these rocks on the pressure pads to gain Zeus’ lightning bolt, allowing you to leave the area. Continue on from this area to find one more Vault of Tartaros containing the Jar of Aiolos.

With your brand new Bow of Odysseus, you should start to see flying enemies appearing around the world. You can now unlock Icarus Wings which give you the ability to glide.