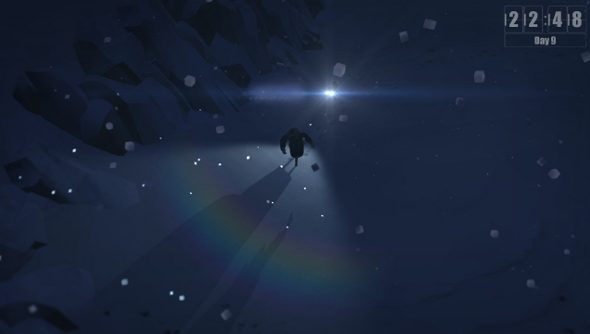 Winter is, according to myriad survival games, just awful. Sure, there are the holidays, time off work, lots of lovely snowmen – but those things rarely make it into sandbox survival affairs. It’s all icey death and frozen limbs. Impact Winter joins the list of these anti-winter games.

“It’s a post-apocalyptic, survival adventure,” says developer Mojo Bones. But they are quick to promise that it’s not as generic as it sounds. You won’t be a lone survivor; you’ll be leading a band of them, with inspiration being drawn from the likes of John Carpenter’s The Thing, which also spawned a tense game of managing desperate people.

So an asteroid hit Earth 8 years ago – as they are seemingly want to do – and now the whole place is stuck in a neverending winter. But somehow, help is coming, but it will be another 30 days. A month of surviving, of managing a team of four, trying to keep them alive and safe from bandits, the weather and starving wildlife.

“The world of Impact Winter has no barriers: a non-linear sandbox for you to explore however you choose,” says Mojo Bones. “Dig for buried secrets, hunt wildlife at night, take shelter from fierce storms, investigate mysterious signals, set up camp during long expeditions, command your team back at the Church, trade with wandering nomads, upgrade your base – and much more.”

As well as a team of survivors, there’s a wee robot tagging along. Ako-Light’s got a handy torch, some limited inventory space and room for upgrades. It’s inspired by R2D2 and Wall-E, apparently. Unfortunately, he can malfunction. Dynamic events, like the Ako-Light breaking down, survivors getting mysterious illnesses, or members of the team going missing replace regular missions.

It’s already been Greenlit, so expect to see it popping up on Steam some time in the future.