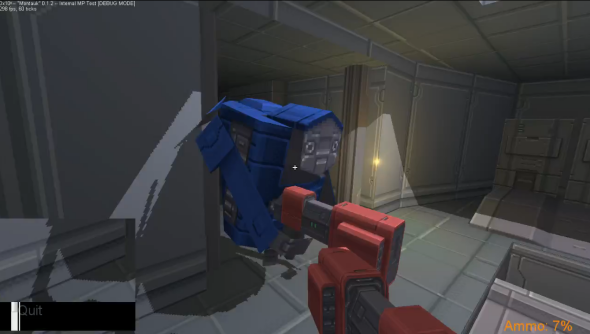 After the enormous and quite extraordinary success of Minecraft, and after he passed the reigns to his colleague Jens Bergensten, everyone was interested to see what creator Markus “Notch” Persson was going to try next. In March this year, he announced that he was working on a game inspired by Elite. Soon after came the title, the enigmatic 0x10c and, bit by bit, slow trickle of information followed. I’ve rounded up every piece of information that I could and herded them into the fact pen, where the bleated all their details to me. Here’s everything we know about Notch’s new project.

It’s pronounced “ten to the see”


best to get this out the way first, right? 0x10c is a hexadecimal
number, ten to the power of c, and “ten to the see” is how Notch says
it, though he’s happy for everyone to come up with their own way of
saying the title. The word “trillek” has become popular among some fans,
which is the correct mathematical term for 0x10c (much as you might say
“a million” for 1,000,000). It features a Red Dwarf-style premise, which explains the title

In
the world of 0x10c, the space race never ended. As it reached the
1980s, space exploration technology became ever more advanced and the
introduction of suspension chambers allowed travellers to make long
journeys with the minimum of aging (making use of time dilation, apparently).
However, thanks to a bug in the drivers for the latest devices, those
who used them were suspended for what, in hexadecimal, was 0x10c years.
In more conventional numbers, that works out as 16^12 or, oh, about
281,474,976,710,656 years. Call it 281 trillion, give or take.

Waking
up in the far distant future, travellers find a dying universe made up
of impossibly remote galaxies and supermassive black holes.This is where
their adventures will take place.

That
means you’ll be able to dogfight, to mine, to trade and to loot your
way about the open universe that you’ll find yourself in, visiting
planets (in seamless transitions) and crossing paths with other
high-tech spaceships. You’ll also spend quite a bit of time tinkering
with and upgrading your own vessel, maybe bolting on a cloaking device
you just found, or desperately trying to duct tape some vital piece of
hardware back together. Yes, the game has duct tape, an all purpose
mechanical band-aid. But you’ll play it in first-person, not from a cockpit view, inside and outside your ship

In an interview with PC Gamer,
Notch said he’d much prefer the game to be “more like a submarine
simulator,” allowing you to dash between compartments such as the bridge
and the engine room. You might have to head down to engineering to
repair some damage, or run to the bridge to turn on a cloaking device or
even put out a fire. It looks like you won’t be able to control, or at
least to fix, every part of the ship from the pilot’s seat, and landing
on a planet will give you a chance to stretch your legs.

The
TV series Firefly was a big influence for the game, and Notch imagines
players improvising hasty repairs after a space battle by setting down
on a nearby planet and venturing out to gather resources. Of course,
this might well lead them into even more adventure, or even greater
danger.

While you’re inside your ship, your feet will find the floor and you’ll align yourself to its artificial gravity (or it’s “magical gravity floor”),
but outside of the vessel you’ll be able to float freely, as if you
were swimming. Notch told reddit that he originally wanted down to be
“any vector at all, but it got gimmicky and confusing.” If your
artificial gravity is damaged, you’ll begin to feel the inertia of the
ship’s movement, being pushed backwards by the force and seeing loose
cables start to swing. In terms of its physics, the game engine is a step up from Minecraft, and even early test videos showed this.

You can play it single-player or multiplayer, with a subscription fee

Since
Firefly is one of 0x10c’s major influences, we can probably expect our
friends to be fellow crew members, working alongside us and, presumably,
sometimes kissing us. While the single-player game will available for a
one-time fee (and much cheaper in alpha), Notch has mentioned two
different multiplayer models. One will be free, but not persistent,
while the other will continue to model all the game’s physics and it’s
computers even when players aren’t logged in, requiring a subscription
fee to cover the cost of running the servers. Ah, yes, those computers.
I’ll get to that bit in a moment. Let’s talk about what they do first.

Ship management will be crucial, both in terms of power…

Many
of the systems on your ship will plug into and be controlled by one or
more computers. This might include your flight controls, your engine or
your cloaking device. You’ll also have to keep an eye on your power
management, as the official site says that your ship’s generator
will have a fixed wattage. Particularly demanding systems will require
you to shut down others, necessitating a quick jog to the mess to make
sure the dishwasher is off.

One
of the first things that Notch did was create a virtual machine, a
ship’s computer that will exist inside of 0x10c and which he’s named the
DCPU-16. It’s a pretty modest thing, with a 16-bit CPU, eight
registers, a stack pointer, a program counter, an overflow and 128k of
RAM. At the moment, it’s being attached to in-game keyboards and
monitors that support sixteen colours and a resolution of 128×96 pixels.
That’s 4:3 ratio, which is proper old school. Notch released the specifications for the machine on his blog back in March and Minecrafters of a technie bent (which is really quite a few) leapt on this.

The DCPU-16 now has its own website and reddit
and its community is growing, sharing not only programs that they’ve
written for the machine, but also ideas for operating systems and
assemblers to convert from 0x10c’s assembly language syntax to the DCPU-16’s machine code. That means they’re not just making software for this machine, they’re also making tools to help other users make more software, then they’re trying these things out on emulators.

That’s
right, there are emulators online that model the behaviour of a
non-existent virtual machine that is only found inside a game that
hasn’t been made yet. I’m so glad that I write about video games and I
had the privilege of typing out that last sentence.

That
doesn’t mean you’ll need to be an expert programmer to play 0x10c.
Using in-game floppy disks you can trade programs with other people and,
I’m sure, buy software in-game. If you need a better flight control
system, but can’t make one yourself, you might well be able to get hold
of one somewhere.

Now,
this leads me to two possible conjectures. First of all, programmers
will be valuable in-game for their ability to create and modify
software, particularly if it gives your ship an edge, so they may be
able to make quite a bit of cash from their skills. Secondly, people
will be able to code viruses. You might want to check twice before you
slide that floppy into the disk drive, because you don’t want your ship
crippled the moment you try to raise shields and fire lasers.

Oh,
and I should warn everyone to code carefully. The DCPU-16 documentation
features this line: “If multiple interrupts are triggered at the same
time, they are added to a queue. If the queue grows longer than 256 interrupts, the DCPU-16 will catch fire.”

The computers make great noises and may soon be speaking

I should add that, during a recent multiplayer test,
Notch mentioned that the beeps and bloops given off by a content
computer are procedurally generated. Right now, there’s no hardware you
can attach to your computer to let it make any more noise than this, but
Notch says he likes the idea of introducing a text-to-speech function, so your computer can shout “WARNING” at you or, I suppose, if you have a virus, “SPACE TOSSER.”

The art style is “is pixel art meets modern 3D”

That’s
according to artist Jonatan Pöljö, who said on the official site that
the look of the game will be influenced by both functional, realistic
spaceship design and “vivid sci-fi.” So far it’s quite bare bones and
has a distinctly retro feel, reminding me somewhat of System Shock, but
it has real-time lighting and seems to run at a high resolution.

Those
bot-like characters seen running around in the multiplayer test are
placeholder models and players will be humans in the final game, but I’m
sure those robots won’t be entirely disposed of. Perhaps they’ll turn
up again as drones or repair droids? Notch considered starting over, because the game was “not fun”

Speaking with the Penny Arcade report,
he explained that he felt the game wasn’t enjoyable enough and that he
wanted to add more “gratification” to please and engage players.

We may be able to play it around March

In
the same September interview, and while acknowledging that he often
misses his own deadlines, Notch said that he hoped to have a very
rudimentary single-player game for people to tinker with in about six
months. That suggests February or March though, since Notch is beholden
to no-one, he’s not likely to rush anything out if he doesn’t believe
it’s up to scratch.

It has its own wiki

If having a wiki before you even exist isn’t a sign of success, I don’t know what is.