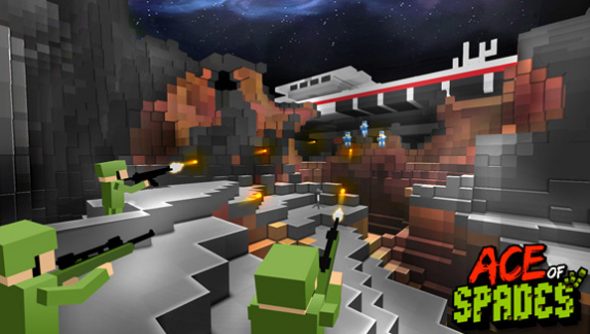 It feels a little odd to be suggesting not that you try a game, but instead join the queue to play it – but there Ace of Spades is, wheels spinning at the starting line. The indie-FPS-that-could-with-the-help-of-Jagex can’t be pre-ordered as such, but over half a million potential players have registered their interest ahead of the game’s launch tomorrow.

“Reaching half a million registrations in such a short period of time is incredible and a real testament to both the quality of the game we have produced and the commitment and loyalty of the Ace of Spades community,” said producer Arash Amini.
“The game has achieved unprecedented levels of popularity and it is great to see so many players pre-register so quickly. We are all go for tomorrow and are confident that the game will be a massive hit this Christmas.”
Jagex have released their final class showcase video for the voxelish construction-centric FPS. Here’s everything a marksman can do:

Are you one of those 500,000? Our Steve went hands on with Ace of Spades and came back muttering about Worms 3D, insisting we “weren’t there, man”.